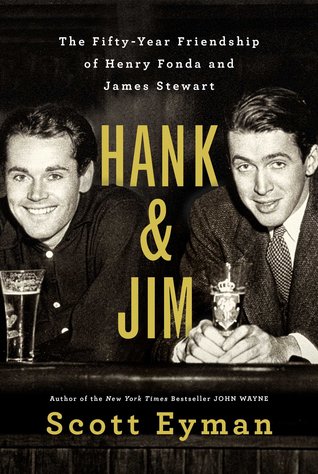 Fans of Henry Fonda and Jimmy Stewart will want to read this biography, written by the author that recently wrote a biography of John Wayne. I was invited to read and review by Net Galley and Simon and Schuster, and so I read it free in exchange for this honest review. It’s for sale now.

The book is well crafted, and multiple aspects contribute to its success. The first is the unglamorous but essential research. Eyman used extensive interviews with both actors’ families as well as directors and other actors that had worked with them. The second is the thoughtful analysis. Eyman’s insights are intelligent and fairly measured, never becoming prurient, gossipy, or mawkish. The third is his friendly, congenial narrative, peppered with telling anecdotes that keep the pages turning.  It’s well organized and doesn’t rely on photographs to tell the story.

These actors belonged to my parents’ generation, and so for a long time I was not much interested in them. More recently, though, I’ve found it’s interesting to see their craft, their lives, and their work  as creatures of the time in which their careers blossomed, and as part of American entertainment history.

The truth is that I never cared much for Henry Fonda. The only one of his movies I saw in the theater was On Golden Pond, and the harsh way he spoke to his daughter on the screen—who was also his daughter in real life, Jane—was so brutal that I never wanted to see anything more that he’d done, apart from the occasional old movie I ran across on television.  Learning later that he was more or less the same father to her in real life didn’t help much. Eyman is unsparing as he describes this aspect of the Fonda family, but he also points to the mellower man he became later in life, and to the tremendous loyalty he showed his friends, Stewart foremost among them.

I was more interested in Jimmy Stewart, who left a more timeless body of work. Harvey is a film I loved enough to search out and watch in turn with each of my children.  Of course, at Christmas time I am inclined to pull out It’s a Wonderful Life, although none of my kids would watch it with me more than once. There was such heart in his roles.

Because I like Stewart’s work, I had already read one biography fairly recently. Robert Matzen’s Mission: Jimmy Stewart and the Fight for Europe dealt well with his war years as well as the early years of his life, and so I didn’t enjoy the first half of Eyman’s book—which covered the same ground again—as I did the second half, which I found both comforting in places as well as mesmerizing.  The second part also has more quotes by his children, who weren’t around for much of the stars’ earlier lives. And I came away with renewed respect for Jane Fonda, who had a harder road than I had previously understood.

Now I have half a dozen movie titles I want to watch, or watch again; that’s a sure sign of a strong biography. And it makes me think warmly of my own longstanding friends, some of whom I’ve known and loved almost as long as the 50 years that Hank and Jim were friends.

Recommended to fans of Fonda and Stewart, and to those that love good biographies; this would also make a nice Christmas gift for older relatives.