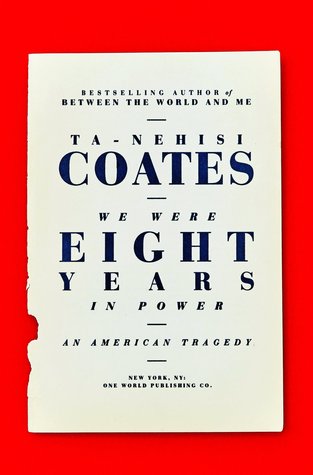 Ta-Nehisi Coates is pissed. He has a thing or two to say about the historical continuity of racism in the USA, and in this series of eight outstanding essays, he says it well. I read it free and early thanks to Net Galley and Random House, and I apologize for reviewing it so late; the length wasn’t a problem, but the heat was hard to take. That said, this is the best nonfiction civil rights book I have seen published in at least 20 years.

Coates started his writing career as a journalist, and became the civil rights columnist for The Atlantic. For those Caucasians that advise Black folk to just get over this nation’s ugly history because slavery has been gone for 150 years, he has a response. Pull up your socks and be ready. To Bill Cosby and Patrick Moynihan and anybody else that wants to blame the high poverty level on the demise of the Black family, look out. And for anyone that seriously believes that the election of Barack Obama to the presidency is proof that America’s institutional racism is dead and gone, step back a minute.

When Coates sets out to make a point, he comes armed for conflict. Not only is he searing eloquent, his research is hard to dispute. Regarding white folk that hold themselves blameless for what their ancestors have done, he wonders why we feel so free to claim our veterans every May and November and yet pretend that our white bedsheeted predecessors have nothing to do with us.

He has a point.

For those of us that are persuaded that the election of Donald Trump to the White House is more about economics and the unemployment of poor white people or the abrasive nature of Ms. Clinton than about white supremacy, Coates has some cogent arguments that run in the other direction. It’s enough to make you stop and think, and that’s why I am tardy with my review. I read in small bites, and then I had to reconsider some of my own conclusions. And although it stings, great writing does this. If we are paying attention, we have to realign some of our own thinking in order to meet the reality this book presents.

Coates is bemused by Caucasian readers that love his work. I understand his bewilderment; nobody likes to hear bad news about the characters of their ancestors, let alone about themselves. But if a thing needs doing, it needs to be done right, and in that respect, Coates is undeniable.

Highly recommended to everyone genuinely interested in civil rights in the USA.