Are the classic “Little House” books memoir or historical fiction, and were they written by Laura or by her daughter? If you’re confused, you’re not alone. In this epic, absorbing biography of her great-grandmother, Fraser tells us. Between her congenial narrative and careful, detailed documentation, this author has created a masterpiece. Lucky me, I read it free and early thanks to Net Galley and Henry Holt Publishers. This book is now for sale.

Laura’s early life was considerably harder than the sepia-toned, heartwarming stories with which she recounts it. Little children could not stand to hear the grueling poverty and crushing losses her family sustained.

“Her autobiographical novels were not only fictionalized but brilliantly edited, in a profound act of American myth-making and self-transformation. As unpublished manuscripts, letters, and documents have come to light, we have begun to apprehend the scope of her life, a story that needs to be told, in its historical context, as she lived it. That tale is different from the one she wrote. It is an adult story of poverty, struggle, and reinvention—a great American drama in three acts…Showing American children how to be poor without shame, she herself grew rich.”

Wilder was a legend unto herself, a fierce, strong woman that could survive anything, anything, and everything. Her story recounts not only personal hardships, but the wide sweeping history that she lived through, from the Westward movement and Manifest Destiny to the suffrage movement, the Dust Bowl, and the Great Depression, as well as the elephant in the room: Indian removal and genocide.

The book, some 600-plus pages, recounts not only Wilder’s story, but that of her daughter, Rose Ingalls Wilder, who was, frankly, a real piece of work. Their lives were so intensely intertwined that to do this any other way would render Wilder’s story incomplete.  And I appreciate the scholarly objectivity with which Fraser treats her subject; it’s not without warmth, but she is clearly not manipulating facts, as some authors do when writing about famous relatives. 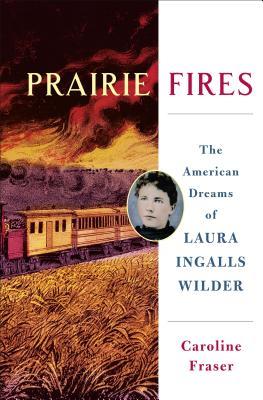 And although I previously named a different title as the go-to biography of 2017, I have to recognize that Fraser’s book is a contender.  Highly recommended.

The American dream has become harder for ordinary people to attain, but Carlson is living proof that it can happen; yet some of us may need to go somewhere else to find it. In his upbeat, congenial memoir, “the pancake guy” chronicles his journey, from the kid of a wretchedly dysfunctional home—and I don’t use the term lightly—to the owner of Breakfast in America, his own restaurant franchise in France. This title was a bright spot in my reading lineup last month, and it can be a bright spot in yours too. Thank you to Sourcebooks and Net Galley for the DRC, which I received free in exchange for an honest review.

Is this a thing that any kid in America could have done? Not so much. Carlson has a rare blend of  intelligence, organization, and social skills; above and beyond all else, he possesses unstoppable determination, clear focus, and a work ethic that never flags for one tiny minute until he discovers he is close to working himself to death. Those lacking talent and determination may never reach the end of the rainbow as this author has done; that much is clear. But oh, what fun to share the ride with him!

Given his family’s expectations for him, or lack thereof, it’s amazing he finished high school, and his acquisition of a college education is more remarkable still. But it is his junior year at a state college in Connecticut that plants the seed that will sprout and grow into a way of life; he is invited to spend his school year in Paris. Once he’s there, the tumblers click, and he knows that he has found his people.

As Carlson’s story unspools, he debunks stereotypes believed by many Americans, and a few of them are ones I believed too until I read this memoir. Carlson delivers setting in a way much more immediate than any number of Google searches can provide, but it’s his insights regarding French culture, law, and society that make his memoir so captivating. The prose is lean and occasionally hilarious. He plucks choice, juicy vignettes from his journey all along the way, and this makes us feel as if we are riding quietly on his shoulder taking it all in as he goes.

If you’ve never been to France and don’t intend to, you can still enjoy this book. If you don’t like pancakes or any aspect of the traditional American breakfast, it doesn’t matter. Carlson is enormously entertaining, and so his story stands on its own merits. I am furthermore delighted to see that the only recipe that is inserted into his narrative is actually a joke. A small collection of actual recipes is inserted at the end, and although I never, ever, ever do this, I intend to try one of them out tonight! But even if you skip the recipe section entirely, you should read this memoir. It’s too much fun to miss. The best news of all is that it’s available for purchase right now.

Get it, and read it!

Fellowship of the Inklings

book reviews and other thoughts from the perspective of a writer