“‘Wille Nelson?’ Mike said in disgust. ‘Willie Nelson? I said Winnie and Nelson–as in Mandela!’ And then with real attitude he snapped, ‘Heard of them?’ He ended with a classic Mike Wallace line: ‘Excuse me, I didn’t realize I had wandered into the toy department.’ Mike then left the office and, walking down the hall, shouted back to Josh, ‘Good luck with your next career move!'” 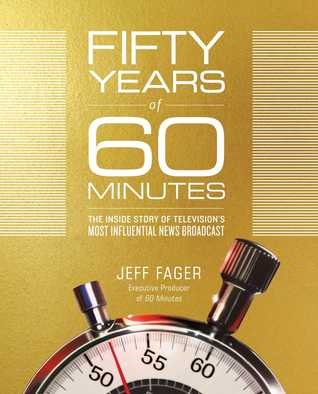 60 Minutes first aired in 1968, a year for news if ever there was one. It was brilliantly conceived as a television news magazine, covering multiple unrelated news stories in a single broadcast. Executive producer Jeff Fager offers the reader an insider’s peek; lucky me, I read it early and free thanks to Simon and Schuster and Net Galley. It’s for sale today.

60 Minutes did the stories nobody else was doing, and its correspondents were geniuses at persuading their subjects to open up and tell the world what it wanted to know. From President-elect Richard Nixon, who promised to ‘restore respect to the presidency’, to the torture of prisoners at Abu-Ghraib, 60 Minutes has been there and spoken to those that have done these things or borne witness to them.  I’ll bet I am not the only viewer that remembers the interview with the bitter, dying tobacco executive with throat cancer, rasping out what he knows on television. From Miss Piggy to the Ayatollah Khomeini, from Lance Armstrong to Khadafi, everyone has 15 minutes of fame…did they interview Andy Warhol? I’ll bet they did.

Just as on the show, the book touches briefly but meaningfully on each subject, complete with lovely color photographs, both formal and candid, and then moves on before one can become bored. The careers of the professionals that worked on the show, behind the scenes and on it, are also described. Perhaps the most poignant anecdote is when ancient Andy Rooney, past 90, developing Alzheimer’s, but still in the saddle, keeps forgetting that he is supposed to give a farewell address. He keeps returning long after he was going to get gone, and finally his son has to write cue cards for him to read on the air. Rooney seems vaguely puzzled when he discovers he has retired.

The whole thing is organized in congenial sections, decade by decade, but it’s the sort of book you can leave on your coffee table for guests to flip through.  If they are adults, I can almost guarantee they’ll say, “Oh hey. I remember this!” What a wonderful ice breaker.

Highly recommended; buy it in the hardcover format.