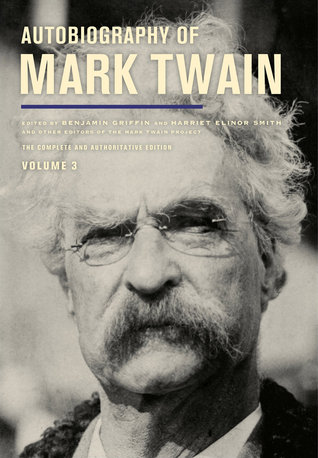 Huge thanks go to Net Galley and University of California Press, who provided me with a DRC in exchange for an honest review. It has taken me some time to read and rate it because once I had the DRC for Volume 3, I decided I should hunt down volumes 1 and 2 and read those first. Now I am finally finished, and it was well worth the effort.

First let’s talk about the obvious thing: how dare I rate Twain four stars rather than five?  I considered the matter and reflected that if Twain himself were to rate it, he might say the same. The reason is that, as he plainly states more than once in his narrative, he is writing not for posterity, but for bulk. An unfair copyright law that was present at the time he began his autobiography permitted a copyright to stand for only 42 years, after which the work entered the public domain. Twain hired a lobbyist to attempt to gain an amendment offering the author the option to renew the copyright, and ultimately he won. But when he started the autobiography, his plan was to write 500,000 words and then republish each of his books with a portion of the autobiography attached so that it could be called a new work and thereby merit a brand new copyright. Twain’s wealth had been considerably depleted by dishonest people in his employ, not once but three times. He had made a fortune, but much of it was gone, partially due to an unscrupulous publishing agent and then later to two household employees he regarded as close to him as family. The double blow of losing so much money and learning of the duplicity of people he had loved and thought loved him was a bitter pill indeed.

So the book contains filler, and this he unabashedly admits. And at times I had found myself wondering why he included all of the letters he had received from cute children he had met onboard a ship, but until I found the bald statement that he needed 500,000 words, I had attributed it to his eccentricity. No, not so much. There is gold in this memoir, and if you like Twain, or history, or both, you should buy it and read it. He says things nobody else has said, and so even once you realize you have entered into a portion of the memoir that is just plain filler and you skim till that section ends, the next things you read will be worth your time and money.

Twain stipulated that the autobiography in its entirety must not be published until he had been dead 100 years. He did this because if he wanted to say someone was a rotten scoundrel and then give details that might well draw a lawsuit, he could go ahead and say it; he also said he didn’t want to hurt the feelings of said people’s children or grandchildren. I’d say he succeeded. Some of those he consigns to the flames are individuals contemporary readers won’t recognize. However, he hated President Theodore Roosevelt with a fiery passion, and he doesn’t mince words where he is concerned.

Most of the memoir is not angry in tone, however; there are places where I laughed out loud. The way he talks about Carnegie, who mentally catalogued every compliment ever paid him and then went through the entire litany when one visited, adding new ones but never removing or abbreviating the old ones, just cracked me up.

Most of all, I loved his explanation of the privileges conferred upon us by old age, one of which was the right to pitch a fit if one felt like it:

“But indeed the older you grow, the less secure becomes the furniture. When I throw chairs through the window I have a sufficient reason to back it. But you–you are but a creature of passion.”

Toward the end  I wanted to sit down and cry with him. He lived a long life, but the outcome was that he outlived three of his four children—a little boy that died shortly after birth, as well as two of his three daughters—and also his lovely wife, whom he adored, and his best friends. The autobiography was to provide support for the two daughters that he feared would not see a nickel from his earlier works because of the copyright laws.

Then two things happened almost simultaneously: the law was changed, with the amendment he had fought for added so that his copyrights could be extended; and the daughter that still needed his financial support, a woman that had spent much of her life in an institution because of epilepsy but now had medication that made it possible for her to be at home with a private nurse, died in the night.

It was right before Christmas, and she had been planning a surprise for her father, a Christmas tree decorated in an unusual, very artistic and tasteful manner, as he discovered when he entered her private sanctuary after her death. There were over fifty Christmas gifts there in various stages of wrap, many of them for people Twain says he would not have even thought of shopping for, and so he just sits in that room with his memoir, and he sobs. His other daughter, Clara, has married an affluent man and is very happily married; she won’t need his money. And now Jean is gone. Twain records the fact that the purpose the autobiography was to serve no longer exists…and he stops writing.

It’s enough to break your heart.

And so it ends, but it is an epic work.

For those planning to get this memoir, I give two crucial bits of advice: first, look at the title of the book carefully. Make sure it is this exact title. If it’s turned around—if for example the title becomes “Mark Twain’s Autobiography”—that’s not the one you want; it’s a knock-off and it’s not really even readable. It’s cheaper, but it is a false economy. The Twain Project took painstaking care in sorting and assembling what amounted to two whole file drawers full (or ten feet of files) of Twain material, some of it duplicated, some of it in his own handwriting, and some of it dictated, then typed by someone else. It was a huge job, and UC did it right.

The second bit of advice is not to worry too much about reading volume 2, or if you do, purchase the book that includes volumes 1 and 2 together. For some reason, even after all the effort that was expended into the organization of this hefty memoir, there is some duplication that renders most of volume 2 the same as portions of volume 1. Maybe it was Twain’s intention to duplicate it and so the Twain Project did so to honor his wishes; I can’t say. But everything you need in order to read this memoir in its entirety can be found in volumes 1 and 3.