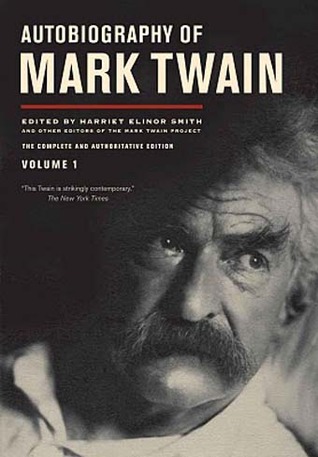 Initially I was surprised not to have seen the autobiography of such a famous individual before. Twain, I learned at the outset, composed his memoir with the stipulation that it not be published until 100 years following his death, because he wanted to be entirely frank about some situations and persons without incurring the displeasure of them, their children, or their grandchildren. Twain died in 1910, and his memoir had been finished just four months. For those of us living now, it was worth the wait. Although I was fortunate enough to snare the DRC for volume 3, I had to go out and hunt down volumes 1 and 2. It’s well worth obtaining and reading for those with the attention span and literacy skills it requires.

There is a lot of material here, and you may be tempted to sample bits here and there using the table of contents. I strongly advise against it. Some of Twain’s most brilliant writing regards things you would not expect to care about. The dispute with a landlord in Italy as his wife lay dying in the villa has the full intensity, concentration, and fire he has to offer. Although I will never know for sure, I suspect that Twain was one of those rare individuals who became even more savagely articulate when angry. The heat of his rage is tremendous and oh so eloquent.

A lot of this writing is gut-bustingly funny, but some of it is also really subtle, and if you rush, you may miss it. I enjoyed reading what he thought of Jay Gould and John Rockefeller; of President Theodore Roosevelt; and of Satan, for whom he confesses that he feels a tremendous sympathy. In other passages he becomes poignant, particularly in speaking of the deaths of his wife and daughter. Nobody but Twain could say it just like this.

Should the reader ignore my advice and choose to jump around, thus missing occasional references to things mentioned earlier in the text, at least do this: be sure to read his remarks about dueling.

The memoir is not linear. He tried several times to sit down and write his life end-to-end, and destroyed some drafts; others he merely abandoned, and they made the assembly of the autobiography, most of which he dictated, all the more complicated as a result. The University of California has done a splendid job of isolating the random repetitious bits at the back of the book in an appendix, while putting the rest of it together in a way that while not linear, makes sense. There are a few interesting photos at the end as well.

Those engaged in the teaching of college level creative writing, of simile, metaphor and other figurative language may indeed want to read this magnificent memoir and pluck some favorite passages for use as examples.

Twain’s life story is not for those with limited focus or who need immediate gratification with minimal effort. This volume, all 738 pages apart from the appendix, kept me company at bedtime when everyone else in our home had the lights turned out and I was the only one still awake. In those small quiet hours I studied the prose of the master, and occasionally had to leave the bedroom in order to laugh out loud, lest I wake my spouse. I would be sorry to have finished, but volumes 2 and 3 still await my attention.

For those that love the English language, and for those with an eye for history, this memoir is not to be missed!

1 thought on “Autobiography of Mark Twain, Volume I, by Mark Twain*****”