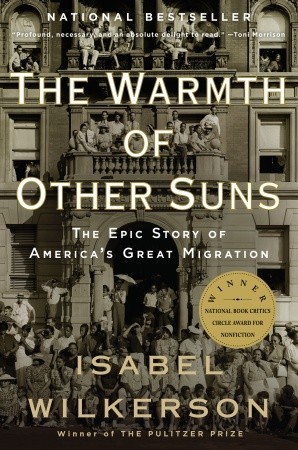 If you have any interest whatsoever in African-American history; American history in general; or Black Studies, this book should already be on your shelf. It is one of the most important volumes to have been written in decades, a comprehensive yet readable and enjoyable look at a migration that dwarfs the smaller California Gold Rush and Dust Bowl migrations in size and scope. Black folks started to leave the south as Jim Crow became entrenched. They did so often at their peril; Caucasians who wanted that cheap and servile day labor were so violently opposed that Blacks planned their departure, in many cases, with the utmost secrecy, buying the train ticket from their own backwater hamlet to a nearby town so no one would suspect they really meant to go to Chicago, Milwaukee, Washington DC, New York City, or any of a number of places in the north and west where there was no official Jim Crow.

Though they still faced a disappointing amount of racism, from segregated neighborhoods to hotels that magically became “full” just long enough for the Black traveler to get back into the car, things were much less tense in their newly found homes. Like immigrants who come to the US from Third World countries, they found that although they did not yet possess the things the White man had, regardless of their own professional qualifications, they did enjoy a better standard of living and lived under less fear than they had back in Mississippi, Texas, or any other part of the Jim Crow south. Some grew homesick and went back where they’d come from, but most did not.

Wilkerson received a Guggenheim fellowship to help support the vast amount of research-related travel and time it took to compile this masterly piece of research, for which she used over 1,200 interviews. Her scholarship is meticulous. Every speck of information provided by a primary source is backed up. She won the Pulitzer for this book, and that is not surprising.

In my own reading of this work, in which she follows the stories of three individuals, interlacing their stories with her more journalistic reporting of the facts on the ground, I found it helpful to skip to the section in which she explains her methodology, before I read further. Thus, I read the introduction, then skipped to the methodology (since I had initially wondered what good 1,200 interviews did if we were going to just follow three, but she cleared that up quite nicely), then the main body of writing, start to finish.

It’s a large tome, and I usually restrict my reading of physically large works to a small portion of each day due to my own issues with arthritis and pain. That went out the window while I read this. It is anything but dry; I could not put it aside. It was as riveting as the most unforgettable biography or memoir, and I kept reaching for sticky notes to mark passages I found particularly compelling.

Sometimes I end my reviews by suggesting a particular book is worth reading, but only if you can get it free or cheaply. Not this time. This is a book the serious reader will want on his or her bookshelves. It is one to refer back to again and again after having read it. If you don’t own it yet, go out and buy it. I hope that in the near future, it will become one of those books that every scholar will be expected to have read in order to be taken seriously. It’s that important…and how lucky we are that it is also fun to read!

1 thought on “The Warmth of Other Suns: The Epic Story of America’s Great Migration, by Isabel Wilkerson *****”