“Try to imagine a world where there isn’t a vast unspoken consensus that black men are inherently scary, and most of these police assaults would play in the media like spontaneous attacks of madness. Instead, they’re sold as battle scenes from an occupation story, where a quick trigger finger while patrolling the planet of a violent alien race is easy to understand.” 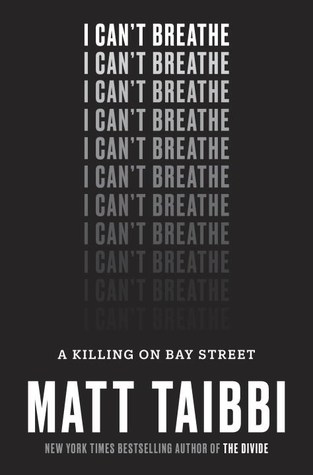 I received an advance review copy of I Can’t Breathe: A Killing On Bay Street, courtesy of Random House and Net Galley. I had expected this civil rights title to be a good read but also to be anticlimactic, coming out as it did just after publications by literary lions like Ta-Nehisi Coates and Angela Davis. I am surprised and gratified to see that Taibbi, a journalist for Rolling Stone, holds his own quite capably. The title is for sale, and if you care about justice and an end to cop violence in the US, then you should get it and read it.

Many readers will recognize the title, which constitutes Eric Gardner’s last words and became a rallying cry for protests that spanned the globe. Why would any cop, especially one not acting alone, find it necessary to put an elderly man, a large person but not a violent one, in a choke hold over what was, after all, a misdemeanor at most? Taibbi takes us down the terrible urban rabbit hole, deftly segueing from Garner’s story, the events that led up to his death and the legal and political fight that took place afterward, to the cop killings of others, and the bizarre, farcical prosecution that takes place in the unlikely event that a cop is ever charged with having unlawfully killed another person.

Though my own life is free from this type of harassment and though I benefit from White privilege and have done so since birth, I found it hard to breathe myself as I read Garner’s story, and the behind-the-scenes machinations that result in the maintenance of the status quo. And I trembled, and still do, for the Black men in my family.

I think many people over the age of 40 understand that the attacks we see publicized online, one by one, Black boys and men that have done either nothing wrong or committed a minor offense that most Caucasian people would never be stopped for, have been taking place for a very long time. What we didn’t have was proof; what we didn’t have was the long view that allows us to see into cities, rural areas, and small towns in America such as Ferguson, where Michael Brown was killed. And there’s one other thing: we didn’t have to look at it before if it wasn’t happening in our own community, our own neighborhood. Even those of us with racially mixed families didn’t see the scope of it. Some would prefer not to know.

Here’s Taibbi’s take on how it unspooled:

“The civil rights movement ended in a kind of negotiated compromise. Black Americans were granted legal equality, while white America was allowed to nurture and maintain an illusion of innocence, even as it continued to live in almost complete separation. Black America always saw the continuing schism, but white America has traditionally been free to ignore and be untroubled by it and to believe it had reached the “postracial” stage of its otherwise proud history. That was until cell phones and the internet came along. When the murder of Eric Garner hit the headlines, it at first seemed to lift the veil.”

Taibbi’s smooth narrative and expert pacing doesn’t make this any easy book to read; nothing can. If it’s easy, you’re not paying attention. But if we ignore Eric Gardner, Michael and Trayvon and Freddie and Sandra and all the rest, we are complicit in their deaths. Highly recommended, even at full jacket price.