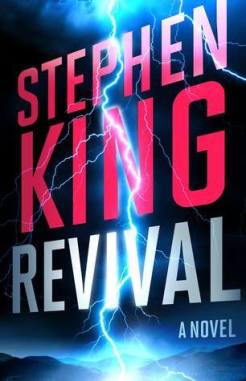 I was reading along; King was his usual irreverent self, cracking wise and bopping to the oldies. I experienced Jamie Morton’s childhood, his family, and the tragedy that befell their pastor, whom he adored. And then…something happened.

As the landscape grows darker, I found Jamie again, older and much changed. The narrative filled me in on the years that were missed, and why things have gone so badly for him. Things are going to get better…and yet, so much worse. So very much worse.

Not too far in, Jamie has a repeating dream that I have had too. I was shocked! I wonder whether it is a textbook example of a grief dream? My repeating dream has been gone for over 20 years, but I had that hummer off and on for over ten before them, and was quite surprised to find them nestled into a horror story. I may try a search on it and see what pops up, not unlike Jamie’s joker in the deck of cards. You never know.

Is it just me, or has King been discussing, under cover of his standard things-that-go-bump-in-the-night, issues involving aging and death? Of course, in a horror novel, people die, and so there are grieving people in a lot of his books anyway. But in Dr. Sleep, the baddest of the bad guys prolonged their own lives at the expense of those who are young and have not had a fair turn on life’s merry-go-round yet. And although Revival doesn’t discuss these things as obviously, underneath it all lies a strong current, that we should leave when our turn is over, not tamper with nature, and accept that when it’s over, it’s really over.

If that wasn’t his intention, it’s not a bad message anyway, particularly for the Boomers whose music he incorporates into nearly every story. We want to stay, but when our turn is over, we just have to go, and make way for those that are being born.

If the reader doesn’t care to reflect on mortality in general, it is still one helluva great story!

First of all, let’s give credit to a writer well past the age of official retirement, who not only writes a bad-ass, award-winning sequel to The Shining, but calls it #2 in the series and is obviously planning at least one more volume. I am not the first to salute Stephen King for his outstanding writing and his unstoppable imagination, but I do so anyway.

Next, let me get this off my chest: I’ve heard more than one person inquire whether they “have to” read The Shining in order to read Dr. Sleep. My admittedly caustic reply here is that if you are willing to read 600 pages of a complex novel and not entirely understand the multiple references he makes to the original novel, then go right on ahead. If it weren’t a series, he would not name it #2. Get it? Go. Read. The Shining. First. Or fuggeddaboudit.

One thing that always strikes me when I read King’s horror novels is that though they deal with seriously spooky material, at their foundation is a bedrock sense of decency. In fact, maybe they work better that way, because they remind us that there is something really excellent in the human spirit that is worth defending.

In this case, we have a group of oldsters that look like senior citizens, to the casual human observer, but who are actually over a hundred years old, and who live off the “steam” emitted by the death of young people that have The Shine. It’s much better if the young folks die slowly and painfully; there’s more steam to breathe in. They call themselves The True Knot. They travel in motor homes, roaming the country much of the year in search of…uh…sustenance.

Abra is thirteen years old, and her family has known for a long time, in an uneasy, back-of-the-mind way, that she has special abilities. It all started when she was an infant, and it freaked them out, but they loved their little daughter, and her uncanny abilities included reading the responses of others. And so, as she grew toward adolescence, she let them think she had outgrown The Shining, because they wanted it to be true.

But things have changed. Abra’s Shine is so powerful that Rose, the leader of the True, can sense her far, far away. Rose wants Abra’s steam, and she intends to have it.

But it cuts both ways, because Abra knows that Rose and her evil cadre have killed children, and she wants them to see justice. Not cop justice; you can’t take something like this to criminal court, even if cops will believe your story. No, she wants, if you’ll pardon the pun, True justice. But to get it, she’s going to need help, and Tony–the “ghostie” boy who once helped young Danny Torrence through a very rough spell at The Overlook Hotel in Colorado–can hook her up with the man he assisted, now a middle-aged hospice worker in New England. Dan helps those who have to pass to the other side. He eases their suffering, and he lets them go. But now it is more urgent that he help Abra, to defend her from the True, and avenge the deaths of the children they have murdered.

And within this tale we have the ultimate question about mortality. If I were going to guess, I would say King has made his peace, at least to some degree, with death, and maybe he even used his own writing to work through it. Because most of us that aren’t convinced that Jesus  or some other supernatural deity is there to provide us with a whole second, even better life have a somewhat panicky response to the notion of our own death. It’s so damn final.

But in an oblique way, King reminds us that when we leave, we make room for someone else to be born. If science could unlock a cure for death, find a way for the Boomer generation (or another) to stick around forever, the population of the Earth would grow too large for the newbies to thrive.

I don’t mean to frighten King’s readers–and those considering reading him who have not yet done so–into thinking this novel is some hectoring lecture. It isn’t. It is a tautly paced thriller with supernatural components. Nobody receives this many awards as a fix or a fluke. He earned them all.

Yet for those of us on the downhill slope of middle age and beyond, the underlying message resonates: at some point, we have to get off the merry-go-round and give someone else a turn.

Once in awhile people ask me to name my favorite Stephen King novel. It has been impossible for a long time, and just got even harder! All I can say to you is that if you have read The Shining, you just can’t miss this one. I found mine in a used bookstore, and it was still a bit pricey for me, but as a source of recreation, I knew it would be a great investment…and I was correct.

Fellowship of the Inklings

book reviews and other thoughts from the perspective of a writer