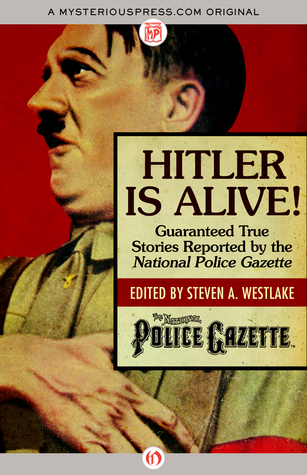 I was invited to read and review this compendium of articles from long ago by my friends at Open Road Integrated Media and Net Galley. I appreciate the invitation. The articles in the collection were really published in a tabloid by the title above during the period after World War II ended, and they are presented here as a bit of humorous nostalgia, rather like the spirit of Punch or The Onion. These articles will tickle the funny-bone of some of its readers, but it wasn’t a good match for me.

It appears that Hitler did indeed have a man-made island set up as a place of retreat; most likely, word of the USA’s nuclear weapons program had filtered through and so an alternate location was devised for him and those he needed with him. In the end, his defeat was so clear and so absolute that even he could see there was no point in going there. However, between the Allied leaders’ claims that he was dead before anyone really knew what had happened and a few other intriguing details, journalists had a great deal of fodder to chew on for the period that followed. The overall tone at times nears hysteria, and because of this, it seems comical now.

Because it was not written initially to be humorous but instead was regarded by its writer as hard journalism, there is a lot redundancy, with old facts being repeated and new ones added in. I suspect that a much more amusing novella could be written using these articles as their basis; on the other hand, Hitler has been the subject of so much other historical fiction that it would have to be unique indeed to stand out from the crowd.

Those considering purchasing this collection might do well to go to a retail site that offers a chance to read sample pages first. If it works for you, go ahead and make the purchase. I have to confess I made it about halfway through and then bailed.

This collection was published Jan 12 of this year and is available for purchase now.