Nobody writes better than Jess Kidd.

Bridget Devine—you may call her Bridie—is an investigator for hire. She’s small of stature, with green eyes and a mane of auburn hair. She smokes a pipe, keeps a dagger strapped to her ankle and poison darts in her boot heels, and wears “the ugliest bonnet in Christendom.” The year is 1863; the place is Britain. Bridie has been hired to find a kidnapped child. A dead pugilist named Ruby has volunteered his assistance; he had a soft spot for her while he lived, and now that he’s deceased, his affection for her lives on.

My thanks go to Net Galley and Atria Books for the review copy. This book is for sale now.

The subject of her inquiries is an extraordinary girl named Christabel. Christabel has unusual qualities; it is said that she is a merrow, a mermaid-like being that loves snails and salamanders can tell what others are thinking, has teeth like a pike that she uses freely against those that displease her, and can drown humans on dry land. Bridie is having none of it. “Christabel is a child. She is not a merrow because they are legendary beasts that do not exist in real life, only in fables.” So what if hundreds of snails appear everywhere the child has turned up?

The search for Christabel takes Bridie and her assistants all over Victorian London. Kidd is a champ with regard to time and place, taking us deep into the past. In particular, we visit the charlatans that collect and sometimes experiment with people born with disabilities or distinctions, as a form of sordid entertainment for those with prurient interests. There are some passages here that won’t work well for the squeamish.

The side characters are magnificent. We have Cora Butters, the housemaid that accompanies Bridie. Cora is seven feet tall and has muttonchop whiskers. Her huge hands make her a formidable defender when the going gets rough. There are others, but some of the most entertaining are the critters: a sarcastic parrot and a sage python are among them.

Those that have read Kidd’s first novel, Himself and her second, Mr. Flood’s Last Resort (in UK it was titled The Hoarder) will be delighted once again to find Kidd’s distinctive voice and brilliant word smithery in full flower once more. There are differences as well; there’s more of a story arc, and along with that we see the best figurative language and the wickedest humor after about the sixty percent mark. At the heart of it all is the same disdain for pretense, and the same deep respect for the working class.

My records show that I’ve reviewed over 1,300 titles over the past few years, and of the review copies I’ve received, I’ve chosen to read fewer than 10 of them a second time. This book will be one of them.

Aren’t we done here? Get a copy of this book and read it soon so that you can buy another copy to wrap up for Valentine’s Day. Because Jess Kidd’s books are peerless, and you should only give the very best.

“Julia hated thinking about money. There’d always been enough. Other people provided, but she had to work. She could sweep and wash and light fires, or she could sing and dance and let them look. Singing and dancing won all, hands down.” 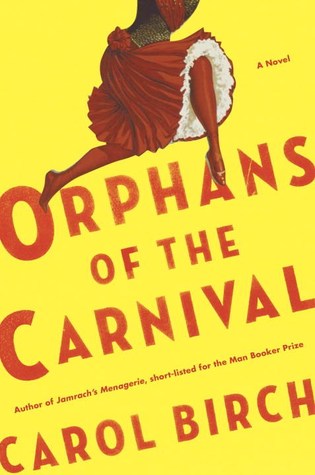 Thank you to Net Galley and Doubleday for the DRC, which I received in exchange for this honest review. The book comes out Tuesday, November 8.

Orphans of the Carnival is a fictionalized account of the life of Julia Pastrana, a Paiute woman born in Latin America in the nineteenth century, a time in history when people born with serious birth defects have no surgical alternatives, and are viewed by many as having been cursed by God; often they find themselves, as Julia does at one point, as traveling circus acts, with their physical difference providing them with a means of making a living, however degrading, during a time when there is no medical alternative and no government safety net.

Her early life is spent as a servant and nurse to an elderly relative after her mother abandons her. Given the chance to perform—and be stared at—for a wage with room, board, and transportation thrown in, she chucks her broom, chamber pot, and scrub brush and hits the road with a circus.

Part of the allure in Julia’s performance is that she begins it completely covered, with a dress, long sleeves, and a veil covering her face; she sings and dances, saving the  big moment when her veil is lifted for the end of the act. In order to make a living largely based on the need of the public to see what she looks like, she cannot go out in public or be seen outside of the show, which makes for a lonely existence. But over the course of time, her circumstances change once she places her career in the hands of a manager named Theo Lent.

There are few remaining records existing of Pastrana, and so when Birch tells this story, most of it is invented. On the one hand, she has little information to work with, but on the other hand, she is also not constricted in her storytelling by a long list of historical details to be attended to. I love the wry way in which she wraps the whole thing up, particularly with regard to Theo, who even the scant available data demonstrates was a real piece of work. I won’t give you any more than that, because there are twists and turns that I didn’t see coming, and I don’t want to ruin it for you.

There’s also an alternate narrative that takes place in the present, involving a woman named Rose, a hoarder with a mysterious background. I think the story would work just as well and perhaps better without Rose, but this is a minor aspect of the overall story, and it also doesn’t detract much if at all from the main plot.

About halfway through the book I run a Google search for an image of Pastrana, and of course, Wikipedia doesn’t let me down. I am shocked, not by how horrible she looks, but by how normal she appears. She does have more body hair than most women, but there’s skin showing through; the appellate of “bear woman” is a tremendous exaggeration. She is born with an overly extended jaw line and a second row of teeth, two separate disorders; in addition, there’s another disorder that causes the excess body hair. But the response of the crowds seems overwrought, though it is undoubtedly what happened at the time; if the public, or a part of it, didn’t see Pastrana as truly unusual, she wouldn’t have made this her livelihood, because the crowds would not have come.

Why read this book? I was initially drawn by the cover, and then again by the unusual topic. In this troubled election period, I am more than ready to escape to a completely different time and place, and to be sure, Julia’s problems make others seem miniscule.

What keeps me interested once I commence is Birch’s writing. She knows how to drive a plot forward, and when to step back from the midway craziness and insert something wry and understated to make us smile slyly. I find myself wondering where she plans to take this or that aspect of the tale, and she never disappoints.