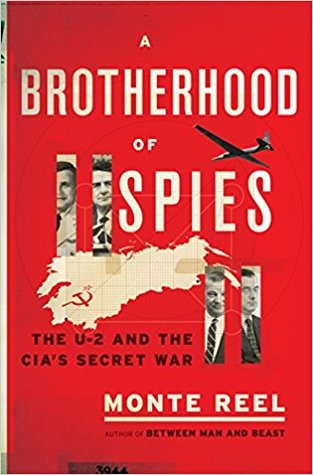 3.5 stars rounded up. Thanks go to Net Galley and Doubleday for the DRC, which I received free and early in exchange for this honest review.

The story begins with a US spy plane being shot down over Soviet (Russian) airspace in 1960. This is embarrassing. Eisenhower’s people decide to make something up; after all, nobody survives an airplane crash over dry land. Moreover, the pilot was provided with a cyanide capsule—James Bond style—so even if he survived, he must be dead; likewise, the plane was likely blown to bits, with not much left for the Soviet investigators to learn.

Let’s say it was a weather plane. It wandered off course, and those mean Soviets shot it down.

But oh dear, this is even more embarrassing: the pilot lived, and he didn’t feel like taking the poison pill. Would you?  So the Russians know what he was flying, and they know who he is. They’re telling the world.

Just reading the teaser for this book, I was hooked. But just as a brilliant writer can take dross and make a good tale of it, so can an indifferent one take compelling information and make it into a snooze. For me, this was not an entertaining read. I had agreed to write about it, so I had to read it, and it felt like work.

I want to be fair here: there are people that will read this book and like it. There’s a lot of technical information about the spy plane, and about many other spy planes, some of which were never built. Apart from the truly bizarre one that was supposed to be landed on its belly (no landing gear), or the ridiculous idea of a nuclear powered plane, I found my attention drifting during these descriptions. But I am not interested in aviation, and if you are, you may like this.

The other aspect that causes my attention to wander is the history 101 aspect of it. I’m a retired history teacher. I don’t need an author to walk me through the Cuban Missile Crisis or the Bay of Pigs. However, I note that other reviewers came to this work with no knowledge of either, and they are delighted to be clued in. For newbies, count this as a win.

Finally, I have to credit the source work. Reel didn’t take the easy way out. His end notes are first rate.

This book is now for sale.