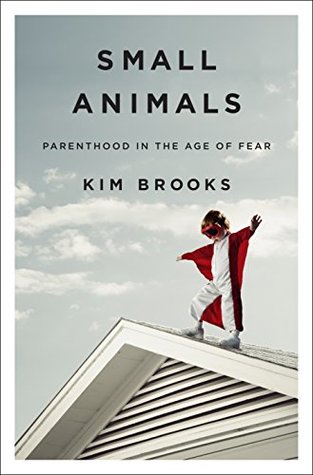 Brooks is a journalist and also a parent; she is nearly sent to prison for having permitted her son to remain in the car watching a video while she bopped in to a big box store to purchase headphones. The experience provided a catalyst for discussions and research she has done on structured parenting practices versus a looser model, for which she advocates. The resulting book is a plea for greater flexibility and more options for parents that either question the wisdom of tight societal controls on parenting, or that cannot find or afford the childcare that their children are legally required to have when the parent or parents must go to work.

I read this intense manifesto free of charge in exchange for this honest review. Big thanks go to Flatiron Books and Net Galley for the review copy.

Brooks has an engaging writing style, and at the outset of the book I was with her entirely. I wouldn’t leave my child in the car as she did, but the legal fallout sure seems like overkill. Whatever happened to a warning first? But later in the text I find some outrageous logical fallacies and suppositions that she uses to bolster her argument in favor of free range parenting. I quickly moved from being supportive, to questioning, to feelings of hot indignation, and several times I felt it best to set the book aside while my temper cooled.

I suspect I have a lot of company out there. I’m a grandmother now; my children are raised, and though I love my grandsons, I am also happy not to be the one that is raising them. So I have the benefit of a bit of space and distance when I look at this controversy. Fresher are my feelings as a teacher, because there are plenty of hot buttons here that connect with educators, and I haven’t been retired from the classroom for long. More on those hot buttons in a minute.

My favorite part of this book is the research behind and inside of it, and she includes some material that is new to me. For example, I wasn’t aware that nearly three-quarters of Americans in their twenties are childless, or that childcare is so hard to find at any price that more mothers—including low income women—are stay-home mothers. There are a lot of great quotes. However, the conclusion Brooks draws from that research leaves me scratching my head.

The head-scratching as well as the hot buttons all have to do with the suggestion that children, including those in early elementary school, be permitted to roam by themselves to whatever family-oriented public locations their busy parents approve of. An example is the public playground. She reasons that if a mom that works fast food for a few hours after school lets out says her kid is allowed to leave school and go to the park, then the kid should be able to go to the park; likewise, if a writer such as herself wants some alone time, she should be able to drop her kid at the park and go home to her keyboard.

This assertion is bolstered by an assertion that very few children are harmed by strangers, and she proves this thoroughly for those that didn’t already know. In addition, she points out that there are already a lot of parents and other adults at the park.

This is the point at which my jaw drops open and I start closing doors and drawers a little extra hard just thinking about what she’s said. Brooks blithely overlooks the common ways that children at the playground get hurt. Let me count the ways: kids run in front of moving swings. Kids climb the slide someone else is sliding down and maybe both kids are injured. Kids chase a ball into moving traffic. Kids have an allergic reaction when previously nobody knew they were allergic to a single thing. Sometimes kids quarrel with other kids, and whereas many parents deal with this appropriately, there are inappropriate parents out there. If your child upsets Poopsie and Poopsie’s mama decides to unload on your kid, who’s going to step in? If an older child invites yours to play doctor in the bushes and wants to show your child something he’s seen mom and her boyfriend doing, who is going to stop them? Never mind the dangerously strange adults; most of us know there are few of them. But what about everyone else, and what about the accidents that a kid can have anywhere, and for which quick action can make a big difference?

Now let’s look at it from another angle. Which stay-home mom at the park wants to be responsible for your child? What if the park is emptying out and she wants to take her children and go get dinner started, but there’s this one solitary, anxious child that will be left behind? What can she do if one of the above-mentioned accidents befalls your child and he or she is unconscious? She calls an ambulance, and then what? Without parental approval, medics cannot even treat your child. An epipen? An IV line? A trip to the hospital? Some states and municipalities may allow a professional to start treatment, but even if they can, most hospitals won’t admit a kid whose insurance details are not known. And then of course there’s liability. If that parent—the one doing his or her job—gives your child a band-aid or a cookie and it turns out to be the wrong thing, what then? No good deed goes unpunished. And right about now, every reader that has ever worked in a public school is vigorously nodding their head.

Then too, many stay-home parents have made a choice to live on less money in order to create a better life for their family. The closest distance between two points is the stay-home mother and whoever has no childcare and wonders if she could take care of their kid because (fill in the blank.)

Usually a book such as this one will make a strong case for more federally funded childcare, and if that was Brooks’ s main focus, I would be posting a review of this book to every possible outlet in an effort to create a more vocal bandwagon. But instead Brooks really just seems to want other people to watch her kid free, and leave her occasional bad choices unmentioned. (She suggests that the person that called the cops when she left her kid in the car should have spoken to her in person; can you even imagine the hell that might befall anyone that openly questions a total stranger’s parenting practices?)

So if you are looking for a conversation starter for your book group, this might be a good choice, because it is loaded with controversial ideas. If you want to see where those kids come from—the ones that wander in unsupervised and seem more needy than the kids that have a relative, day care supervisor, or nanny in attendance—here is your epiphany. But if you are a prospective parent looking for advice, I suggest you run in the other direction. Run fast.