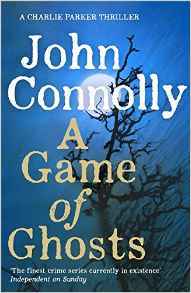 John Connolly writes two kinds of books. Some of them are good; some are damned good. This is one of the latter. It’s the fifteenth in the Charlie Parker series, and it marks a turning point; previously a thriller series with mystic overtones, it’s now a stew combining multiple genres. Connelly heats his cauldron and pours in a healthy dose of suspense, mixes in some detective fiction, and blends in horror and fantasy as well, along with a pinch of humor. The overall result is deliciously creepy, the kind of story that stays with me after I’ve read a dozen other less memorable books. Big thanks go to Net Galley and Atria for the DRC, which I read free and early in exchange for this honest review. The book is for sale now.

Parker has a haunting past indeed; in the first book of this series, his wife and daughter Jennifer are murdered by a man that has come looking to kill Parker. Our hero sets out to find and kill the man that did it, and he succeeds; yet his thirst for stark, take-no-prisoners justice is not satisfied. Now the father of another daughter, Samantha, that lives with his ex, our current mystery finds Parker in a conversation with the girl’s uncle, who asks hard questions about Parker’s risky behavior. He wants to know why Parker keeps chasing bad guys now that his initial quest has been fulfilled. Why hunt down evil-doers when he might adopt a lifestyle more in line with the best interests of his still-living child? Parker responds,

The premise here is that Parker is sent by FBI agent Ross, who he has agreed to work for under terms mostly his own, in search of Jaycob Ecklund, a man also employed by Ross who has vanished. Once Parker’s search for Ecklund commences we learn that the missing man was a ghostbuster of sorts, a man with a basement full of files on the paranormal. Many others are interested in Ecklund also, and the plot ramps up quickly and doesn’t relent until the last page is done.

The plot here is complex, and Connolly weaves in a host of characters, both living and dead. We have The Brethren, most of whom are alive yet already damned. We have Angel and Louis, a pair of characters that have appeared throughout the series that work with Parker; their darkly amusing banter helps lighten an otherwise almost unbearably intense plot. We have clairvoyants; we have The Brethren; the hollow men; we have a number of murder victims, before, during, and after their deaths; there is the Collector, who is tied to Parker like a falcon, and must always return to him.
And we have organized crime figures Phillip and his Mother, who abduct him in order to find out what Parker does and what he knows, in a civilized way, of course.

“There will be tea.”

Mother is the best villain this reviewer has seen in a long time.

The entire book is brilliantly conceived and flawlessly executed. And although Connolly’s series is worth reading from the get-go, those that hop in without having read earlier books from this series will be able to follow and enjoy this shapeshifting mindbender of a novel just fine, but those that genuinely believe in ghosts may not want to read it at night.

Highly recommended to those that love excellent novels of suspense.