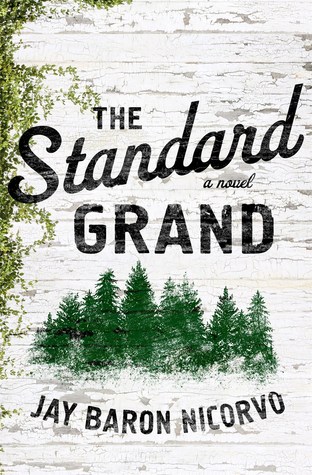 “A loaded gun wants to go off.”

Critics have compared Nicorvo’s brilliant debut novel to the work of Heller, and indeed, it seems destined to become the go-to story of those that have served in the unwinnable morass created by the US government against the people of the Middle East: “a drawdown war forever flaring up”. It’s created a tremendous amount of buzz already. I was lucky enough to read it free and in advance for the purpose of a review, thanks to Net Galley and St. Martin’s Press, but today it’s available to the public. You should buy it and read it, maybe more than once.

The story starts with a list of the characters involved, but the way it’s presented provides a tantalizing taste of the author’s voice. The page heading tells us these are “The Concerns”, and the subheadings divide them into practical categories, such as The Smith Family, the Employees of IRJ, Inc., and The Veterans of The Standard Grande (misspelling is mentioned later in the story). Then we proceed to list The Beasts, and The Dead, and The Rest, and right then I know this is going to be good.

Antebellum Smith is our protagonist, and she’s AWOL, half out of her mind due to PTSD, anxiety, and grief. She’s sleeping in a tree in New York City’s Central Park when Wright finds her there and invites her to join his encampment at The Standard Grand. Here the walking wounded function as best they can in what was once an upscale resort. One of the most immediately noticeable aspects of the story is the way extreme luxury and miserable, wretched poverty slam up against one another. Although the veterans are grateful for The Standard Grand, the fact is that without central heat, with caved in ceilings, rot, and dangerous disrepair, the place resembles a Third World nation much more than it resembles the wealthiest nation on the planet.

On the other hand, it’s also perched, unbeknownst to most of its denizens, on top of a valuable vein of fossil fuel, and the IRJ, Incorporated is sending Evangelina Cavek, their landsman, out in a well-appointed private jet to try to close the deal with Wright. She is ordered off the property, and from there things go straight to hell.

Secondary and side characters are introduced at warp speed, and at first I highlight and number them in my reader, afraid I’ll lose track of who’s who. Although I do refer several times to that wonderful list, which is happily located right at the beginning where there’s no need for a bookmark, I am also amazed at how well each character is made known to me. Nicorvo is talented at rendering characters in tight, snapshot-like sketches that trace for us, with a few phrases and deeds, an immediate picture that is resonant and lasting. Well drawn settings and quirky characters remind me at first of author James Lee Burke; on the other hand, the frequently surreal events, sometimes fall-down-funny, sometimes dark and pulse-pounding, make me think of Michael Chabon and Kurt Vonnegut. But nothing here is derivative. The descriptions of the main setting, The Standard Grand, are meted out with discipline, and it pays off.

As for Smith, she still has nightmares, still wakes up to “the voices of all the boys and girls of the wars—Afghan, Iraqi, American—like a choir lost in a dust storm.”

There’s so much more here, and you’re going to have to go get it for yourself. It’s gritty, profane, and requires a reasonably strong vocabulary level; I’m tempted to say it isn’t for the squeamish, yet I think the squeamish may need it most.

Strongly recommended for those that love excellent fiction.