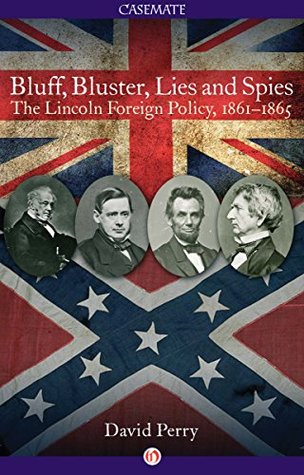 The American Civil War is part of the curriculum I used to teach, and in retirement I still enjoy reading about it. When I saw that Open Road Media had listed this title on Net Galley to be republished digitally this summer, I swooped in and grabbed a copy for myself. I was so eager to read it that I bumped it ahead of some other DRCs I already had, and I really wanted to like it.  Unfortunately, this is a shallow effort and it shows.  Don’t buy it for yourself, and for heaven’s sake don’t advise your students to read it.

It begins gamely enough with a discussion of events in Europe and how the changing contours of that part of the world affected the attitudes of England, France, Russia, Prussia, and Spain. At this point my curiosity was piqued, because I had never read anything about which side of the Civil War the last three of these countries favored.  But if the rest of the text can be believed—and parts of it cannot—the reason we never hear about Russia, Spain, and Prussia with regard to this rebellion is that they decided they had no stake in its outcome. This part of the text could have been dealt with in one sentence rather than owning a share of the introduction and being dragged in again later, but this is not the only bit of obvious filler that burdens this misbegotten book.

I am tantalized initially when Perry brings in a controversy that does interest academics: would Britain have recognized the Confederacy in order to get cotton, or was it busy with other considerations and willing to obtain cotton from colonial holdings in Egypt, India and elsewhere for the duration? This question is discussed, leaves the narrative and is broached again several times, because although the book has chapters, it isn’t organized. The same topics of discussion, and the same quotations that serve as its meager, questionable documentation are dropped into the text again and again. It’s as if Perry doesn’t expect anyone to read it all the way through and is hoping we will drop into the middle of the book somewhere to look up a fact and then leave again without seeing whether he actually knows what he’s talking about.

For example, after citing the same obscure document for pages on end—since I read it digitally, I highlighted “Dispatch 206” seven times before noting that this section, at least, is garbage—he brings up Poland. He talks about Poland and Russia’s attachment to same as a buffer state, but never shows any relationship between Poland and the American Civil War other than that Russia had other greater priorities at this time, which had already been established in an earlier section.  And he misuses the term “Manifest Destiny”. Perry apparently believes this term has equal use to multiple governments in reference to themselves around the world.

He tells us that privateers are outlawed during the Civil War and infers that this, therefore, will surely mean that all the sad pirates will dock their ships and get honest jobs. No more privateers out there now, matey!

He says that Lincoln was a slow thinker, and he refers to American diplomats as ditherers.  He documents none of it.

I read the citation section to see if more joy would be had if I pursued this book past the halfway mark. I read his author bio, which indicates no expertise regarding this conflict, which by now doesn’t surprise me.  Frankly, I don’t understand why this book ever saw the light of day, or why Open Road would republish it.

I would love to say that those with deep pockets should go ahead and order it if they can afford all the books they want, but I can’t even say that. The book is unreliable, disorganized, and badly documented. It contains falsehoods and insults the reader’s intelligence.

Put your plastic away. This is dross.