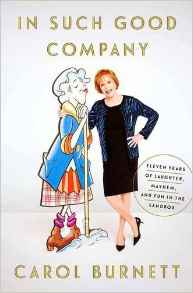 When I saw that Burnett had published a memoir of her years as America’s favorite comedic performer on The Carol Burnett Show, which ran from 1967 through 1978, my first thought was, what, another memoir? She’s already published at least three others, one of which I have read and reviewed. But the fact is, she hadn’t used up all her juice yet. Each of her memoirs focuses on some particular aspect of her life, and so this book is new, it’s original, and it’s probably the stuff you were hoping she’d talk about in her other memoirs. Lucky me, I read it free thanks to Net Galley and Crown Archetype. It was published September 13 and I am sorry to be on the late side, but I scored my own copy just prior to publication; I had no idea it was available till Crown put a promotion up on Facebook and it showed up on my home page.  I genuinely held my breath as I logged onto Net Galley to see if I was too late, and happily, the Literature Fairy smiled on me.

As the memoir begins, I am at first a trifle disappointed, because it appears as if she is just going to list every single person that’s ever appeared on her show and gush about how nice they were.  But she’s just warming up, and it gets more interesting. She describes how she made her way into show business, and though she skims over the early years, knowing that the reader wants to get to the show, it sounds very much as if she was the overnight success that aspiring actors only dream of becoming.  She was on a show that I wasn’t around yet to watch called “The Garry Moore Show”, and she must have made not only a tremendous impression, but also a lot of friends, because she was offered her own variety show—think of it!—and then was able to bring a head writer, a choreographer, a bunch of dancers and some other people west with her from New York to Los Angeles.

This show was a fixture in my childhood and adolescence. One of Burnett’s regular satirical sketches lampooned soap operas, and it was called “As the Stomach Turns”. It was one of the few things that made my parents and me laugh out loud at the same time. My friends and I spent ridiculous, late night hours creating our own satire of a satire, which we dubbed “As the Stomach Churns”, and which featured imaginary illicit relationships among our own teachers along with the administration, janitorial staff, and especially our librarian, a book hoarder that chased away all potential clientele from her sacred gates.  So when I saw that Burnett was writing about the show, I had to see what she’d written, because she had been an intrinsic part of my own development.

All comers that want to read this should do it near an internet source if at all possible, because the comedic sketches can be viewed on television and now also on YouTube. This is fairly new: I tried to view them a couple of years ago and they weren’t there yet, so this is exciting all by itself.

And if you have never seen any of her work and wonder what I am carrying on about, check it:

and with Robin Williams:

The life that she led sounds like something most actors could only dream of. She got up, got her kids off to school, started work on the show mid-morning Monday-Friday, with a single run-through on Thursday followed by a live show before a studio audience Friday, and then they were done at three o’clock and she was done by the time her kids were out of school. It came down to disciplined behavior on the part of the cast and crew, and to the unusually respectful atmosphere in which the show was done. Once a guest misbehaved and when he threatened to storm off the set, she let him go and said good riddance; they did the show without him.  (She won’t give us a name, but he was short. I have been speculating ever since.)

She does tell the many spoofs that were done on movies of the past, and which actors called to say they just loved what the show had done with their film, and which either called up and were angry or sent indirect messages that they were not amused. And she  offers a retrospective look at the way women in show business were expected to behave back then; she was sometimes a doormat, and exultantly recounts how Edie Gourmet, on a guest visit, gave some of it back to those that bullied Carol.

Some of the funniest bits of writing are included, and some of the regular cast’s best onstage moments are recounted, along with those of favorite guest stars. A complete list of every show and which guests were featured is at the back of the book for those that want to look up particular entertainers, or  peruse it for fun.

But the bottom line is that this is pure gold for those that love Burnett and the show, and that can follow along some of the high performance points online. If you aren’t interested in her work, then the memoir won’t mean much to you.

Recommended to Burnett’s many fans.

1 thought on “In Such Good Company: Eleven Years of Laughter, Mayhem, and Fun in the Sandbox, by Carol Burnett****”