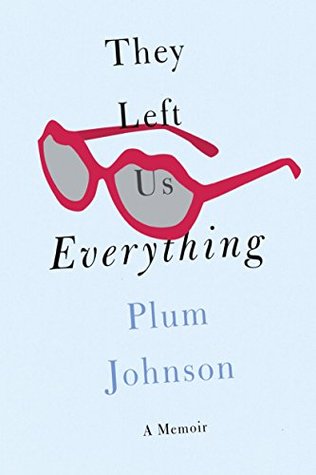 Plum Johnson is gathered, together with her siblings and other family members, at the family manse following the death of her mother. This memoir focuses on the things she’s learned and the insights she gains over the course of the year it takes to empty and sell the property. Thank you to Net Galley and Putnam Penguin for the DRC, which I received free in exchange for this honest review.

I knew when I requested this story that I was stretching my comfort zone. It paid off big time a couple of times recently–one of them was The Goldfinch—and since there seemed to be a lot of buzz generated around this title, I thought I’d go for it. And I have to admit, this time it was not a good fit. But I am confident that there are readers out there that will enjoy it. Different strokes and all that.

The first thing that jarred me was right up front, and it was a small thing, yet a big thing. The pet the author remembers so fondly—the one that’s buried on the property—was named Sambo. I felt like I’d been slapped, to be honest. If that was the pet’s name, I’d think an author today would have had the sensitivity to change it for purposes of publication.

Enough; let’s get on with the meat of the story. The author has spent years under the domineering gaze of her dying mother. The woman didn’t go fast, and she didn’t go out a pleasant person. In some ways it makes it harder to grieve when someone goes out ugly, because it sends all sorts of conflicting emotions rocketing through one’s senses, which are already jumbled sufficiently at the loss of a family member. And it is in taking time to go through her mother’s things, the more personal ones apart from the things that have resale value, the letters, the journals, the things she saved for so many years, that the author feels as if she really knows who her mother used to be.

I think there are a lot of us out here, Boomer-era adults that have said goodbye to parents or are still doing so, that can relate to this. Often it takes a fair amount of experience to appreciate our parents’ better moments, to realize that some of the things they did for us that we took for granted were not  the same things everyone’s parents did. Plum’s musings made me think of my own mother, a woman that died disappointed with life and darned cranky about it, but who told me about the internment of Japanese Americans and made me use standard English by the time I was five. Like Plum, I find myself wishing my mom could return for a visit to give me one more chance to thank her for the things she did right.

We get a glimpse of the author’s life, the choices she made and what her mother had to say about them. But it was difficult for me to relate to them, not only because of the level of affluence that is demonstrated here, but also because it’s depicted as being part of the everyday landscape. Plum doesn’t feel more fortunate than others, but rather this is what her normal looks like, and while I understand that for some people that is reality, I found it alienating. Art versus tennis? That’s the controversy? In addition, for most of the book we also assume that people are white, because that’s what normal looks like to Plum. There are a few places that break this up a little bit, and it is for that reason, together with the fluency with which the memoir is written, that I rated this 3 stars rather than 2.5.

Figure out who you are, and that will tell you whether this book is your book. It’s for sale to the public July 19, 2016.