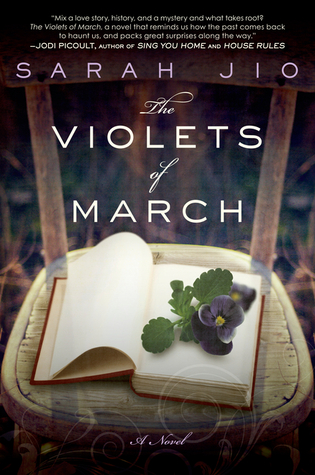 The Violets of March is a crossover title, part cozy mystery, and partly—maybe mostly—romance.  I purchased it for myself years ago, back when I was teaching, not advance-reading, and buying all my own reading material. It’s not a bad book, but given that I had paid full jacket price for the trade paperback version after reading some rave reviews, I felt let down. It’s a pleasant read, but it didn’t live up to its hype.

Nevertheless, once I had it in my collection, I was glad of it, because at the time, the other books I was reading were the sort that grab the reader by the hair and won’t let go till they’re done. I needed a calmer, more sedately paced novel to read at bedtime, and this was it. It held my attention, but it didn’t keep me awake when it was time to turn out the light.

Our protagonist is Emily Wilson, whose life, up till now, has been lovely. She is a successful author and married to a gorgeous man; what more can she want from life? But then one day he announces he is leaving her for someone else. Boom. Gone. She retreats to the home of her beloved aunt on Bainbridge Island, which is off the coast of Washington State, to lick her wounds. While there she finds herself ferreting out mysteries buried long ago. The plot becomes a story inside a story, and three different narratives are counter posed, two from the past, one from the present.

At the same time, Emily commences dating again. Here I am comfortable, because this isn’t erotica, it is an old fashioned love story, with the protagonist trying to choose between two men, one an old flame from high school, the other a local man she hasn’t known before.

The character development is not what I might hope for, but then this is a debut novel. It’s shallow, but it’s also soothing. It held my attention until I got a little bit sleepy, and then it didn’t anymore, which was exactly what I needed.

In addition, it is the sort of novel one could hand to a bookworm daughter of a fairly young age, if her reading level and interest were there, without worrying about content. Likewise it could grace the shelves of a middle school or high school classroom without a concern that parents would storm the school (as once occurred when I put The Color Purple on my honors shelf).

That said, I won’t pony up full cover price for this author again. But then, I rarely do that anymore anyway.

Those seeking a light romance with some cozy historical mystery elements to read at bedtime or on the beach could do a lot worse for themselves. It’s a matter of taste and priority.