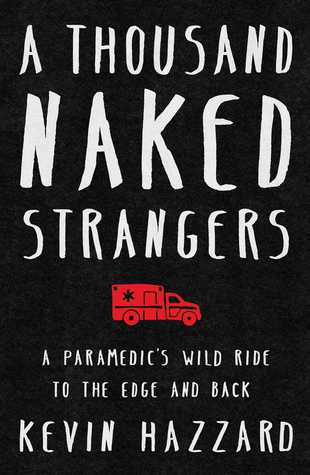 Take a former journalist; make him a paramedic in a high-poverty, high-danger area for a decade; then turn him loose again to write about it, and he will play his readers like violins and make us like it. A Thousand Naked Strangers is a high octane, gloriously visceral ride in an ambulance and out of one, through Southeast Atlanta, Georgia. Thank you to Net Galley and to Scribner for the DRC. Since I read multiple galleys at a time and I loved this one best, I tried to feed it to myself in small nibbles, like Mary Ingalls hoarding her Christmas candy, but it was just too riveting and I could not stay away.

At the memoir’s beginning, our guy is just looking for work. With just a few months of training, he can become an EMT. His journalistic career wasn’t working out as he had expected, and he found himself working as a paperboy instead, delivering the newspaper for which he had written. That’s about as rock bottom as it gets.

He becomes an EMT; then he sets out to discover whether he wants to commit to the extra year and a half of schooling required become a medic. Once in, he’s hooked, not so much in spite of the risk and unpredictability of the job, but because of it.

And when you think about it, what other job pays so very little, involves so much danger, and gets so little respect? Teaching comes to mind, but being a rescue worker trumps even that, particularly for the low pay and insane hours–holidays missed–to do it, a person needs to be young, and to be an adrenaline junkie. And for a decade, Hazzard fits that description.

When he starts out, he is callous, as youth often are, speculating with his partner about what constitutes the perfect call. The perfect call, to their way of thinking, has requirements that are measured in the number of dead and wounded, the amount of danger. Does the patient have to survive in order for it to be a perfect call? Nah.

Over the years he matures, and he becomes more respectful of the patients with whom he deals. He talks to addicts, hookers, and children in a way that is forthright and kind. The job takes a lot out of him, but it also gives him a lot. He grows up. He deals with the dead; the nearly dead; those that are feigning death; and those that are just looking for a free ride somewhere. He delivers babies in record numbers, and he transports a guy on a roof down to the ambulance. He sees just about everything, from suicides to homicides, from the domestically abused, to the kid with a roach in her ear. He plays the wildest imaginable pranks, and once in awhile he gets called on the carpet for it.

Some of the incidents described in this memoir are just drop-dead funny, if you’ll pardon the pun, and I laughed out loud more than once. Some are incredibly dark. Some just left me with a feeling of awe. But although the tone changes many times, the pacing is absolutely consistent. Hazzard’s journalistic background shows; every single word is there for a reason. It is tight, taut, and urgently compelling, all the way through.

1 thought on “A Thousand Naked Strangers: A Paramedic’s Wild Ride to the Edge and Back by Kevin Hazzard *****”