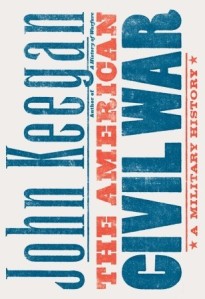 This was a disappointment. Keegan’s history of World War I was outstanding, and likewise he did a brilliant job with World War II. In contrast, his treatment of the American Civil War is nothing special. His sources are secondary; he hasn’t spent countless hours sitting in local and regional libraries reading collections of letters or rare documents. The man lives in England, and as far as I can see, he may have written this book from there. His maps are insufficient, and the ones he does use are the ones you’d see in anyone else’s American Civil War literature. Likewise, his photographs are ones I already saw somewhere else.

All of that could still make a four star work if he put a fresh perspective into play. I recently read and reviewed the outstanding Our Man in Charleston, by Christopher Dickey. That book offered the British perspective on the conflict, and it was very different from that of either the Union or the Confederacy. I had hoped that Keegan would likewise offer a new perspective and a lively discussion.

The book is instead, dull, dull, and dull. I did not see one piece of information I didn’t already know…and he called John Brown a “wild man”, perpetuating the textbook stereotype that tends to be used by those that don’t care to dig too deeply.

In his end notes he thanks James McPherson, and really if you read McPherson’s Battle Cry of Freedom along with the memoirs written by generals Grant and Sherman, you’ll learn far more and with much fresher, more interesting prose. It is these to which he refers most liberally.

On the plus side, I got my copy used. On the sorry side, it was still eight bucks I could have spent on something I want.

I advise you to read something else. If you want to read Keegan, read about one of the world wars. If you want one basic yet thorough treatment of the American Civil War, read Battle Cry of Freedom. But not this book.