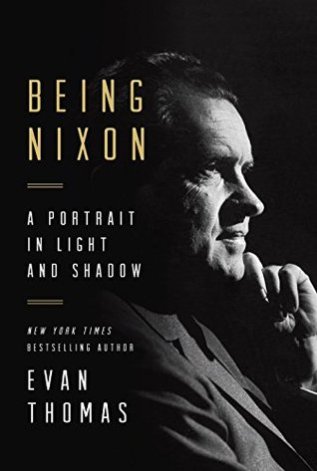 Suddenly, everyone is writing Nixon biographies; it’s a Watergate junkie’s dream come true! Here Thomas does his best to take us inside Nixon’s skin and tell us what motivated some of the decidedly strange things he did. It makes for highly engaging reading. 3.75 stars get rounded up to 4, along with my thanks to Net Galley and Random House for the DRC. This book is available for sale now.

When I signed on for this galley, I imagined that perhaps Thomas had a background in psychology or psychiatry and was going to take a stab at diagnosing a mental illness that might explain what in the world Nixon was thinking when he did the things he did; if he’d had different meds, would things have shaken out differently? But that isn’t what this book is about. Instead, it is a glimpse at Nixon’s life, including his early childhood and adolescence, postulating that childhood experiences may have shaped the politician Nixon became.

To this, I will admit that I said, “Psssh. Right. Whatever.”

Because it’s a plain and simple fact that many presidents had lives that were scarred by events as bad or worse than what Nixon experienced, and most of them still managed to do their jobs without coming within a hair’s breadth of impeachment. So I don’t buy that theory.

Nevertheless, there are so many interesting tidbits and stories in this memoir that even if the reader doesn’t buy the overall thesis, it’s a compelling read. The conversational narrative kept me rolling along, and every time I found an opinion I thought was baloney, I made a note of it and kept going. I would have continued reading even if I didn’t have an obligation to the publisher, because it really is fascinating stuff.

Imagine, for instance, a solitary candidate with a love for classical music, sitting all by himself in his hotel suite, with the 1812 Overture blasting away, with his arms furiously directing an unseen orchestra. Just one aide saw this, and Thomas ferreted the incident out and presented it here. I doubt you’ll find these tidbits anywhere else!

In addition, few other biographers have managed any insights into what went on in the Nixon residence. I often wondered about Pat, Tricia, and Julie. When he showed up to home, did he storm in and turn the coffee table over? Get quietly drunk? Blame his family for all his ills? Drawing heavily on the memoirs written by family members that I am unlikely to ever read, Thomas gives us a little voyeuristic peek behind the curtains, and I found it intriguing indeed.

When it comes to Watergate, Thomas holds Nixon responsible for what he did, for the greater part, but I rolled my eyes at the repeated claim that if he hadn’t been too shy to socialize with the staff, with the Washington socialites who invited him to dinners, and so forth, maybe he would not have become so isolated…if his childhood hadn’t been so poor, and if his father hadn’t kept him home from his Yale scholarship because there was no money for dorm fees…if…if…if…

I felt much more certain that the author’s research, which is mostly done via secondary sources and the Nixon family’s memoirs, including heavy use of Nixon’s own (RN), was based on fact when he dealt directly with Nixon’s personal life. Although various quotes by the Watergate conspirators were interesting, some are more believable than others. I found one fact in this bio that directly conflicts with that of biographer Tim Weiner, and it has to do with the choice of Spiro Agnew as a running mate. Thomas cites reasons personal and political; Weiner documents that the choice was bought and paid for by Greek financial interests. Here, I believe Weiner. It’s just one directly conflicting fact, but when I found it, just as a humble reviewer rather than as a researcher, it called other things into question, which is where ¼ star fell off this review.

The author thanks a number of people in his after-notes. I always read those, because you can pick up little things lost elsewhere. He especially thanks the man that told him to beware the various items found in the prodigious memoirs by “that old thespian”, Richard Nixon, who was a student actor before he went into politics. It was strong advice.

In perusing this biography, I realized two things. The first is that the reason Nixon had so little domestic policy, and the reason the country moved so smoothly without him during the tortuous period prior to his departure, is because he didn’t have much of a tool kit to start with. The author notes that although Nixon has gained a sinister reputation as an evil, sneaking genius, in fact there were areas in which he really wasn’t all that smart, and this was one of them. He focused on three things: foreign policy, in which he was better equipped to carry out the wishes of the bourgeoisie than most presidents have been; running for office again and when that was done, honing his legacy, about which enough has been said; and of course, revenge, revenge, revenge.

The second thing I realized is that the reason he was virtually cast out of office in a situation in which other presidents might have been able to pull their chestnuts out of the fire, had to do with the fact that he believed himself, as US president, to be more powerful than the ruling bourgeoisie. He misjudged the relationship of power between himself and those that rule us quietly, usually in an unseen way. In attempting to yank the broadcasting license of CBS as part of a personal vendetta against the owner of the Washington Post, he took on a sector of the ruling rich, and he made of himself an object lesson.

By my count, this was my twelfth Nixon biography, though I may have read and forgot about some others. It’s neither the best nor the worst, but for those fascinated with Nixon’s rise and fall, and with Watergate, it should go on the to-read list. It’s just too good to miss!