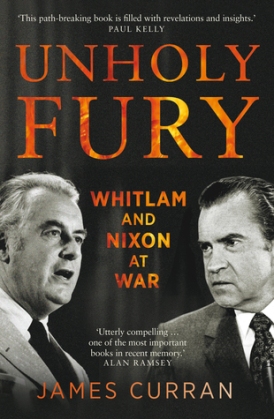 All of a sudden, everybody is writing a book about or featuring Richard Nixon. Having grown up during the Watergate era, I voraciously attack anything and everything apart from the most blatant apologists’ work. This title, in which Nixon’s relationship with the government of Australia and in particular, Gough Whitlam, who became Australian prime minister during the Nixon administration, is examined, seemed like a good diversion from what I usually read. Like many Americans, I tend to focus too exclusively on matters having to do with the USA. It probably has to do with the size of the country and consequently, the sheer weight of available material on matters closest to home. But I knew next to nothing about Australia’s government, apart from their participation as an Allied force in World War II and their status as a friendly government to the US and Britain, so I dove in.

Thank you to Net Galley and Melbourne University Press for the galley, which I received free in exchange for an honest review.

Between the title’s subheading and the book’s cover, which shows Gough speaking and Nixon looking furious, one might almost conclude that the two nations were on the brink of a shooting war with one another. Not so, not so. Yet the antagonism that sprung up between the two nations during a time when both had outspoken and sometimes abrasive leaders is unquestionable. There were two primary realms of disagreement that went beyond mere personality issues. One was the role of Australia in relation to the USA, and the other was the future of Asia in relation to both countries and in general.

Before reading Curran’s biography, I had never thought of Australia as an Asian nation. I sort of considered them to be out there adrift, all by themselves, being kept company just by New Zealand the Pacific Islands. I am aware that they are on the opposite side of the equator from where I am, and so when it’s summer here, it’s winter there. That, cowboy boots, kangaroos, and an unfortunate record for treating indigenous people fairly, one which the US shares, about sum up my knowledge base.

I’m embarrassed to admit that I didn’t know the capital was Canberra.

Nixon was mostly not focused on Australia, and that, it seems, was a part of the problem. Menzies had preceded Whitlam as prime minister, and he too was an old hand who thought largely in Cold War terms. Nixon and Menzies had been fond of one another. But when elections were held and the beleaguered President Lyndon Johnson was due to leave Washington, he told Australia’s representatives, who were opposed to the US intervention in Vietnam, that they “might have one or two problems” with Mr. Nixon. It was a very droll understatement.

First, Nixon was outraged that a nation that looked to the US for security and aid would dare publicly criticize its role in Vietnam, and then—worse—in Cambodia. He regarded the Australians as a satellite that ought to be grateful and not bite the hand, etc.

Gough Whitlam took office with an eye toward creating a more independent Australia. He considered Australia very unlikely to be in danger of external attack for ten or fifteen years at least, and was aghast at Uncle Sam’s ugly doings in Indochina. He was looking for distance, and Nixon, under enough pressure from enemies without getting it from friends, erupted. Eventually Richard Nixon played a dangerous bluff on Moscow by recalling nuclear missiles from nearby Fiji, which involved the use of Australian terrain, without actually notifying the Australians. Visions of a mushroom cloud on home soil didn’t do much to endear President Nixon or the American government to Australians, needless to say.

Whereas Nixon was convinced that communist hoards would continue to advance across Asia unless Vietnam was forced to adopt a parliamentary democracy, Australia felt that it was time for the super powers to quit telling smaller nations what to do and abide by home rule in whatever form its citizens chose.

Though no actual shooting war was ever threatened or contemplated, the US did examine alternate places for its bases—a $5 billion dollar investment in 1970’s dollars—and at one point, Australian dock workers voted not to unload goods from US ships. In turn, US dock workers placed a moratorium on Australian trade, which left a good deal of beef rotting near the dock for days on end. And sometimes, with breathtaking rapidity, trade wars can in fact lead to shooting wars. It wasn’t going to happen this time, though; the USA already had its plate full.

It probably is telling of my own ethnocentrism that I had difficulty focusing on the lengthy passages leading up to the conflict. There’s a fair amount of detail regarding Australian politics that novices like me may find it hard to plow through. On the other hand, the author should have known that communists would never use the term “Vietcong”, which was a pejorative. Vietnamese freedom fighters are referred to as members of the National Liberation Force.

Even if the reader gives in and skims those bits of political nuance that will suit some interest levels but not others, there is a great deal of entertaining dialogue and detail in the meaty center of this work to make it worth reading.