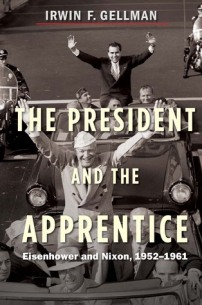 Gellman’s biography covers Nixon’s tenure as Vice President of the USA under President Dwight Eisenhower; he covers the election campaign beforehand as well as the famous “Checkers Speech”. Thank you to Net Galley and Yale University Press for the DRC, which I took in exchange for an honest review.

It is a little bit hard to be sure about this work, because the galley I got was so rough that it was difficult to judge its fluency. I settled on 3 stars rather than 4 stars because I saw some issues with organization, small tidbits that only marginally bore mentioning showed up in multiple chapters.

That said, it’s a good resource for anyone looking to study the Eisenhower administration or Nixon’s early years in government. I learned some things I didn’t know, and I have read my share (and maybe your share too!) of Nixon-related literature. Gellman has done a great job with research, and even offers pictures of primary documents, such as Ike’s notes during Nixon’s famous speech, at the end of the book.

I learned that the USA of that time period was a much more innocent one than that which we live in now. The Checkers Speech is one good example: now it is regarding laughingly as a mawkish bit of theater, but what is not widely publicized anymore is that the American public was asked to respond as to whether he should stay on the ticket, and they flooded the Republican headquarters and media centers with letters that supported him 350 to 1.

Now that it is known that he used public dollars for personal gain as president, I had rather assumed he had done the same during the funding crisis in question, but actually, back then he was guilty of nothing. The donations that were made were a travel fund, because the Nixons didn’t have the money to travel around the country campaigning. Donors pitched in for their air fare, cab fare, and hotels. There was no law regarding campaign spending limits back then; no law was violated.

As vice president, Nixon had more responsibilities, and occupied a position of greater trust, than most who occupied the same position. He was sent overseas, not only as a good will ambassador or ribbon cutter, but to do unpleasant, tricky things, like talking down the heads of state in South Korea and Taiwan. In addition, Ike never cared to do his own dirty work domestically, and so if someone needed to be officially taken apart, there was a good chance Nixon would be tapped for the job. He had an unstoppable work ethic and was unflinchingly loyal.

If Nixon’s vice presidency is of interest to you, get a copy of Gellman’s book. It goes up for sale in late November, so you can also consider it as a holiday gift if someone you know would appreciate it.