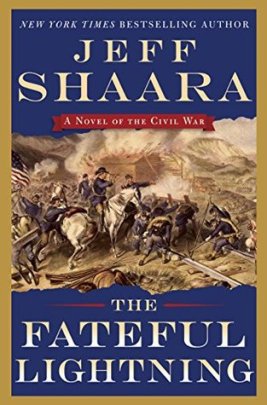 Those that love strong Civil War fiction have to get this book. It comes out in June, but thanks to the wonderful people at Net Galley and Random House/Ballantine Publishers, I was able to sneak a peek ahead of time. Although it is the fourth in a series, it also works really well as a stand-alone novel if you know the basic facts regarding Sherman’s siege of Atlanta and its subsequent burning. As we join him and his hardened veterans fighting under Howard and Slocum, “the two fists that Sherman intended to drive through the heart of the deep South”, they prepare to march to the sea.

I have read every one of Shaara’s novels, those about the Civil War as well as the American Revolution and US war against Mexico. I am a fan. The last in the series, The Smoke at Dawn, left me hovering between a four and five star rating. It was a good read, yet I wasn’t sure I liked the way he voiced Sherman; I thought he made him sound a bit remote. But then it became evident that the controversy that sparked the indignation of other reviewers was his inclusion of one fictional character among the various perspectives presented (he flips back and forth, a format he uses regularly and that readers of his other work will recognize). The fictional character was invented to represent the too-often-voiceless rank and file, without whom the war would not have been fought or won. And I thought that this was actually a great idea, so I flipped from four to five stars in defense of his choice.

In this final installment, Sherman’s voice sounds much more real to me. I don’t know what happened, but it feels to me as if all the cylinders clicked into place. William T. Sherman is one of my heroes; I consider him America’s all time finest general, with Grant coming in second. He remains controversial to this day, mostly in the American South, so for those who wonder, the perspective definitely leans toward the Union, though both perspectives are given space. And it seems gobsmackingly obvious to me that in a war between feudalism and industrialization, between slavery and freedom, the latter should be the team to root for. But for those that feel differently, you’ve been warned.

Here we also meet a new fictional character named Franklin. Franklin is a slave until Sherman’s men come through. His father, an older man who was hobbled permanently by one of the master’s coon hounds when he attempted to flee, won’t leave the Plantation even after he hears that he is free. The master is gone, but it doesn’t matter. Walking is too hard, and frankly, he is also too afraid. And if someone were to sic a mean dog on me, I just might feel the same. But his son, Franklin, is grown, strong, and completely unafraid. He is allowed to join Sherman’s men as a laborer, and during a fight, he makes a heroic choice even though he has not been given a weapon or even permission to touch one. And the role that Black troops and spies also played is also included.

Throughout the narrative, Shaara’s voice feels authentic and honest to me. The reality of racist Caucasians within the Union’s forces is acknowledged, and the horrible crossing in which one of Sherman’s new, political generals causes the drowning of an unknown number of African-Americans trying to follow the army across a pontoon bridge that’s being withdrawn from enemy forces is not glossed over. More importantly, the slave breeding that brought international shame on the United States, a practice done exclusively here, in the “land of the free and home of the brave”, is presented; I can’t think of any other novelist I’ve read who includes this critical factor.

Fans of military history will appreciate Sherman’s approach to the war, that one cannot win by capturing the capitol of the rebellion, but rather, the Confederate forces must be defeated, and the people of the South that supported them had to know they were done. The desertions that marked the end days of the Confederate Army were the result of Sherman’s “juggernaut” through the South. Those that left home to fight to defend it, sometimes deserted for the very same reason. Home might not be safe; they might be needed back there. Shaara’s depiction of Sherman was consistent with Sherman’s memoir in this and every other regard.

In reading Shaara’s note to the reader, I felt a bit sorry for him, because it sounds as if every single Civil War buff has some treasured bit of arcane information or some hero in the family and they’re annoyed that Shaara has failed to include them. But this was one big war, and as the author notes, he can’t include everything. His publisher has set limits in terms of time and space. And Shaara has served them, and the memory of those who served the side of moral right, admirably.

The book will be sold in time for Father’s Day. But really, you should buy it for yourself. It’s worth every nickel.