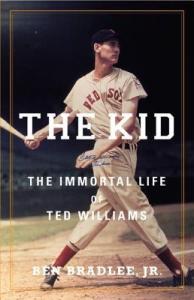 The Kid is the definitive biography of baseball legend Ted Williams, a hall-of-famer who still holds the record .406 batting average today, though he is (mostly) gone. Carefully documented, fluently told, and brilliantly edited, this baseball bio is not a quick read, yet there is also not a single word in it that is not necessary. Your humble reviewer walked away from the opportunity to receive a DRC, unsure I wanted to mow through over 700 pages with the amount of speed and diligence necessary to fulfill an obligation to the publishers. Recently I was able to get a copy to read at my leisure independently, and have enjoyed a fascinating glimpse at one of the most complicated figures in American sports history.

Williams was a tremendously gifted athlete, one with an intelligent approach who carefully analyzed his vocation and the physics related to it at a time when nobody in baseball was doing that yet. He spent one year in the minors, then went straight to the major leagues and the glory that quickly became his. Williams was an incredible hitter but struggled for a long time as a fielder, back before the “designated hitter” position existed. His career was twice interrupted for military service, and he chose to go down with his flaming fighter plane in Korea rather than risk breaking his legs—and possibly ending his baseball career—by bailing out and parachuting down to safety.

His personality was riddled with contradictions. Politically he was known for his rock-ribbed Republican conservatism, snubbing JFK’s overature but embracing Presidents Nixon, Reagan, and HW Bush. He avoided an endorsement of McCain for the presidency only because “Bush’s kid” was also running, and he wanted to remain loyal to the Bush family.

Yet with regard to race issues, he was among the most liberal. Bradlee says that the “curse of the Bambino”, i.e. the inability of the Boston Red Sox to win a pennant or a ring for a prolonged time period, was actually brought upon the team by its owner’s refusal to integrate the team long after the rest of Major League Baseball had done so. Williams, however, sent a letter of congratulations to Jackie Robinson when he broke the color barrier, and although Williams did not take part in the Civil Rights movement, not seeing it as his place as one who owed allegiance to the owners of his contract, nevertheless encouraged integration when it unfolded and was more welcoming toward Black players than most other Caucasian athletes in Boston. He paid tuition quietly and usually anonymously for promising young athletes on both sides of the color line.

It is speculated that part of this attitude toward minority players was due to his own Mexican heritage (on his mother’s side), but we will never know. He didn’t talk about it.

On the other hand, he secretly spent his time off visiting children in cancer units around New England, stipulating only that his time and money must never be publicized, apart from work done for his charity, the Jimmy Fund, which he established for sick kids whose families could not afford medical care.

In addition to being one of the most gifted hitters of all time, Williams was a prodigious, accomplished, avid fisherman, and spent most of his months away from baseball fishing in Florida, Canada, and even Latin America. In fact, everything he approached with great enthusiasm and with an analytical viewpoint, he seemed to master.
His marriages were disastrous, his children dysfunctional. The last years of his life were exploited badly by his only son, John-Henry, and Bradlee suggests, with good cause, that Ted perhaps was trying to make up in his dotage for his failure to guide and raise his children when they were young.

A tremendous scandal broke out at the end of his life when John-Henry sent Ted’s remains to a cryogenic facility to be decapitated and frozen. Denial may not, as Twain said, be “just a river in Egypt”, but some of us take it farther than others. John-Henry (and in time, his sister Claudia) wanted to have the family frozen in the hope they would one day all be thawed; the vagaries of age and disease scientifically reversed; and then they could all be happy together. A daughter from Williams’ first marriage was greatly upset by this and took the matter to the press; she was eventually paid to settle down and go away, but the family’s reputation was ruined beyond redemption.

Bradlee deserves a great deal of credit for his readable yet scholarly narrative. This reader was fascinated by most of Williams’ life story, though I never saw him play. (Readers who are also fishing enthusiasts will be delighted, no doubt, but I am not one, and confess that some of his fishing exploits and achievements left me glassy-eyed.)

Those looking for a strong baseball biography about one of the sport’s greatest players need look no further. The Kid is an absorbing look into both the life of Williams as well as the history of baseball. Recommended for those that love the sport and have the stamina required to read a comprehensive biography.