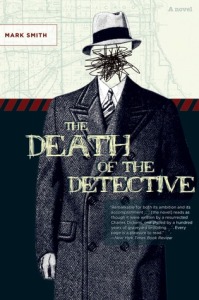 Mark Smith is one helluva writer. The Death of the Detective is complex yet hazy, with a million details both enumerated and obfuscated, not unlike a day in Chicago, the city in which it is set. All told, an enormously satisfying read. Tremendous thanks go to Net Galley and Brash Books for the DRC.

The time period is the post-war era. With the Great Depression well behind it and World War II a recent triumph, the USA is at the pinnacle of its wealth and worldwide power. The Death of the Detective is spun around the lives of a handful of men , all in Chicago during this time period, men whose lives intersect and then trail away from each other, sometimes joining again, and sometimes not. The style is a lot like that last sentence, compound sentences that last a long time and yet build up to something rather than becoming unwieldy. I have never read a voice like his before.

But back to our story. First we have the protagonist, Magnuson. He is retired from his life as the head of a locally famous security firm, and life has not been the same after his wife died. He is depressed. He’s invited old friends over to play cards and perhaps talk about their glory days, but the evening is ruined, because one of them has invited a man he detests without consulting Magnuson first. He is so irritated that eventually he abandons his guests and goes to bed. If only he would stay there!

Next up we have Farquarson, at least for a short time. Farquarson is a wealthy old man, and a mean one. Perhaps it is fortunate that he is dying. Unfortunately, he has just enough time and evil intent to send out a number of extremely unkind messages, some of them whispered, others sent as poison pen letters through the US mail. Once he is gone, his parting actions send things spinning in all sorts of directions, disrupting and ending the lives of good and decent people…and others’ also.

In addition there is Cavan. Cavan has lived his life in the self-absorbed, irresponsible, idly dilettantish manner of a sole heir to a vast fortune. After all, Farquarson has no children, and he is the only nephew. He spends and drinks recklessly while planning his scholarly (and expensive) trip to Africa. His field is anthropology, and his budget is one he assumes to be bottomless. What a surprise he has awaiting him.

Finally, we have our assassin. The man would probably be considered bipolar today; he has delusions of grandeur and a lot of other strange notions too. He was committed to a psychiatric hospital, but then getting over the wall is sometimes just a matter of persistence and athletic ability. Once he is out, he takes on a number of identities, foremost among them, Death. How fortunate, then, that he has wandered into a murder mystery where he can be useful.

At times, Smith’s noir fiction is reminiscent of the late, great Donald Westlake. At one point I was surprised to find myself laughing out loud over a wry turn of events.

Smith’s well-braided story also pulls in additional supporting players with more limited roles. We have a klatch of criminals, members of an organized syndicate, and we also have some hoods that want in and will do terrible things to prove themselves. We have local cops. We also have an assortment of young people associated with Cavan, as well as ordinary people across whose paths our story marches.

Because we’re all in this together, ultimately.

One thing of which the prospective reader should be aware is that the main characters are all Caucasian, and they are generally racist. The “N” word drops in now and then, and although its use is entirely consistent with the characters who are either using it out loud or thinking it—think of white Chicago businessmen and cops during the 1950s and 1960s—it is jarring. Perhaps it would have been more offensive simply to assume, as many writers still do, that characters in the story are all Caucasian; yet I think I would have enjoyed the novel more without that particular word, and perhaps with fewer racist statements and thoughts by the characters involved. This is my sole complaint about what is otherwise a truly outstanding mystery.

Smith is brilliant at conveying the emotions and thoughts of his characters through action. This reviewer was hooked at the end of the first paragraph, when the man in the diner cut his meat and then stole the knife. Smith’s internal dialogues are lengthy but so well done that rather than reacting with impatience, the reader must instead feel as if she is getting extra time with a remarkable story for no extra cost. His facility with figurative language, particularly simile, metaphor, and repetition are so skillful that I found myself flagging pages to share with students I no longer teach. It was both wondrous and disappointing.

I no longer have my students, but I have you, reader, and unlike most of them, you read what I have to say by choice. Pay attention! Sit up straight! Spit out your gum! Oh hell, I’m sorry; I forgot myself for a moment.

What I really want to point out is that not only do I consider this book well worth your time and money, but it was nominated for a National Book Award, and the author has an impressive list of credentials. But had he not, I would still recommend this amazing novel on its own merits. Originally released in 2007, it was re-released February 3, 2015. Get it and enjoy!