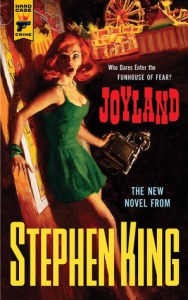 How many Stephen King stories have I read over the decades he’s been writing them? More than ten. A dozen books, maybe, or perhaps more; if we start counting single stories, then certainly more than twenty. And since he has become more sentimental as a writer as he’s grown older, I thought I knew what to expect from this one.

Mind you, I still wanted to read it; even had I guessed its contours, King tells a story with the humanity and every-day realness, despite his chosen genre, unlike anybody else, and so I would not want to miss it.

We have a young man who’s taking a summer job at an amusement park in North Carolina. And we have a past murder on one of its rides, its only “dark” ride. A young woman whose throat was sliced during a brief unlit interlude; she was cast over the side like someone’s leftover lunch sack, and found later.

I was pretty sure at some point all of the rides would come to life and do terrible things.

I was pretty sure the climax would occur on the dark ride, or the place where it was housed.

I was wrong on both counts.

Joyland was a quick read, and a deeply satisfying one. The teaser he wrote to sell his book promised I would consider mortality and be deeply moved, and I can’t say that occurred, but it surely left me thoughtful, as well as grateful that the master of the horror genre is still writing after all these years.

I was able to get a library copy, but would have purchased it if I had to; King is so reliably enjoyable.

If you love stories with supernatural elements and things that go bump in the dark, get this book and read it.