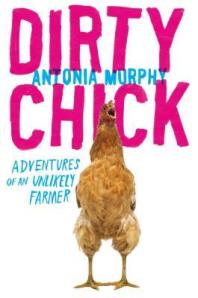 Writing humor is risky business. If one writes mainstream fiction or nonfiction and the book is not well reviewed, of course it hurts–writing is always personal, at some level–but few things are as painful as the I-thought-this-was-going-to-be-funny review. In writing about her own family and friends, albeit with a few small changes to protect the privacy of the individuals concerned, Antonia Murphy takes her bleeding heart in her own two hands and offers it up to the public for consumption.

Personally, I have never laughed so hard in my life, or at least not recently. My thanks go to her and to the Goodreads first reads program for the ARC.

If my earlier reference to Murphy and the bleeding heart made you wince, you won’t want to read her book, either, because it has lots of gooey, graphic, gross stuff in it. It is edgy humor out there on the edge of wild, like the hinterlands of New Zealand where she has made her home. Well, see for yourself. This is from the prologue, so it doesn’t ruin the book for you:

“As I watched my goat eat her placenta, I was mostly impressed…Pearl had always been a strict vegan, so her sudden craving for raw meat showed a real taste for adventure…The placenta draped gracefully from her hindquarters, a translucent pink train enclosing a network of blue veins. There was a dark red, ropy thing inside, heavy with blood and the color of liver. It was this that Pearl tucked into first, craning her neck to nibble and swallow…”

As I read, I tried to analyze what it was that made her humor work. Part of it was her sense of remove, the dry commentary of the detached observer even when she is right in the middle of everything. But every now and again, something will happen in her personal life that shatters the entire I’m-just-watching thing. For one thing, she has two children, and when one meets with a really dangerous misadventure, Murphy is nearly consumed with the fear, the stress, the confusion that every mother on this planet, save for a frightening few misfits, would feel at such a time. So we laugh at all the icky stuff and her reactions to same, but now and again we remember that she is vulnerable to the same nightmares that we are. It gives us a stake in what comes next, and between the hilarity (most of the book) and the pain (deftly meted in small doses), there is no putting this book down once you reach a certain point.

Here’s how it shook out at our house: I would read a passage to myself, then burst out laughing. I would hustle straight past my husband, a man of delicate sensibilities with regard to animals and biological detail. I knew he did not want to hear it, or read it, or even be reminded of it. Instead, I made for the younger daughter’s room. She is a teenager with a great lust for gore, so of course she loved it. And I know that if I had headed for the adult-son-who-sometimes-lives-here, he would have chortled merrily also.

The narrative of this amateur adventure at farming just sat on my giggle button. Murphy, rather than wanting to control and fix every little (and large) thing that occurs, has this brilliantly mellow approach. Wow, the goats keep attacking the cars. A neighbor observes that eventually, they will break her windshield. Huh. Well…she loves those goats, so she isn’t going to “dead” them (her daughter Miranda’s word). She doesn’t want to sell them, and after all, who would want them? And fences are very expensive. She is, after all, just a renter.

Occasional visions of the landlords returning to find their property trashed would wink into my head, then wink away.

Every time I think Murphy and her husband are in over their heads and everything is completely out of control, she takes on an additional project. When all is falling apart, why not find something more to add to it?

So there’s Jabberwocky, the rapist rooster. They might have to dead him. Everyone likes baby chicks, and the hens can’t get preggers without him, but the thing is, he’s psychotic. Eventually she comes to understand that this is how it is with roosters. They start bad and get worse, and sooner or later, one generally HAS to dead them.

Good god. See what she’s done to me?

I have four more outstanding quotes, but they are too close to the end of the book. and it would ruin it for you. And the fact is, almost every single page has at least one quote that is fucking brilliant. I think I mostly marked the pages that showed transitions occurring in the plot, and that’s all well and good for academics, but this is not an essay, this is a review, and therein lies the distinction.

Because you, dear reader, don’t want to know how the book ends, and you are capable of analyzing all its nuances yourself, should you choose to do so. On the other hand, you could also just get the book, have an outstanding weekend curled up in your favorite reading spot, and then be done with it.

For those not grossed out by the references in this review, this is a sure fire hit. Pick it up when you have the blues, and I guarantee that in minutes your worries will be smaller.

When you look at it that way, ordering a copy of this book is really the sensible thing to do.

1 thought on “Dirty Chick: Adventures of an Unlikely Farmer, by Antonia Murphy *****”