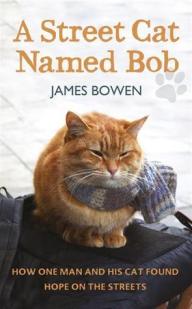 How does a young man from a middle income family end up sleeping on the streets in a cardboard box, addicted to heroin?

Answer: it happens all the time. It’s closer than you think.

James Bowen does a really fine job relating, in this lovely little memoir, how it happened to him, and the role Bob, a street cat who adopted him, had in pulling him off of Methodone and toward recovery and a life in mainstream Britain.

Here’s the disclosure: I won this book through the Goodreads.com giveaways. I say this on the fifth day of my new blog with a kind of nostalgia, since this was the first book I got free in exchange for a review; it’s been just over a year since then. The review to follow is the one I originally wrote for him back then.

James Bowen’s memoir smacked me upside the head by showing me a bias I did not know I had. First, I assumed this might be poorly written, and successful in England for the content and novelty of its subject matter rather than any attendant writing skill. When I saw the elegantly simple text, the well-crafted pacing, the deftness with which the writer weaves his life’s narrative in and out of the tale about himself and his cat, I started to look for a co-author or an “as told to”. In short, I did not really believe that someone who had (as he put it) “fallen between the cracks” of society would have the skill to write this book.

Slap my Marxist mouth! I am appalled by the social Darwinist that was lurking in the shadows of my own character, and I thank Bowen for casting that particular demon out by the dumpster, where it belongs.

Bowen has a few really brilliantly descriptive passages here, but he is not a master wordsmith. What works is the continuity of the story without any pauses for maudlin self pity. What amazes and strikes deeply, at least for me, is the way he continues for an astonishingly long period of time to assume that the cat will not want to stay with him. He has taken it in, but assumes that the streets will do better for this critter than he ever could. Time and again, he offers the cat the opportunity to run away and reject him, even after he has spent nearly all of his hard-earned money gained as a street musician on veterinary care, food, and wow, even a microchip (which my own little beagle does not have). Bob has the character to stick around, though, and eventually, in a truly marvelous moment, when a well-to-do woman offers Bowen a thousand pounds for his cat, he in turn asks her the price of her youngest child.

Sometimes people who have seen life’s dark underside commit terrible crimes and take a passive voice in discussing them later. They didn’t do something, but rather, it happened. A recent headline in my home city blared that a killer had apologized for his crimes, but when I read the article, the “apology” turned out to be, “I am so very sorry for the things that happened.” Though Bowen is surely no killer, I was watching for it. I’ve worked with youngsters who have been in and around the juvenile “justice” system here in the States. They get good at distancing themselves from their own wrongdoing, seeing it as tragic but inevitable, and adults do it too. But Bowen does not do that and does not go there. Anything he did, was something he did. If it was wrong, he owns that too. It gives his writing integrity that those who feel terribly sorry for themselves cannot impart.

So here it is. This book is terrific, and you should buy it and read it. When I entered the giveaway, I signed an agreement that this review could be used for marketing purposes by the author and his agents. I wasn’t required to write it, though, and if you’ve read my other reviews, you know I never pull punches. This one was well earned, by the way the man pulled himself out of the abyss, for himself and for his kitty, and for the way he tells the story.