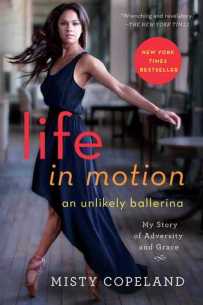 I rate this four stars for general audiences, five for those interested in the ballet.Misty Copeland, star ballerina with the American Ballet Theatre, wants us to know that when she enters a stage, she thinks, “This is for all the little brown girls.” And rightfully so. She is the first Black ballerina to rise to this level of prominence in twenty years, and the first ever to star in The Firebird.

I read this book free courtesy of Net Galley. I approached it not as a fan of ballet, but as an avid reader of autobiographies and memoirs. When I rate this book a five-star read, I do so not for a niche audience, but for anyone who enjoys reading stories of personal struggle, triumph, and success.

Copeland, who is racially mixed but identifies primarily as African-American, is famed for her work on the stage, but she can really write, too. I kept half an eye open to see if a byline or as-told-to would crop up somewhere. Copeland’s education was often disrupted by a chaotic childhood; her mother, a loving but apparently capricious individual who seems to have had terrible taste in men, had trouble staying in one place. Dramatic departures that took all of Misty’s “tribe” (her loving term for her siblings) in as co-conspirators, became a pattern, but they never seemed to leave the first “daddy” until Mama had a second one already waiting for them. How does a young woman whose life—and education—are tossed up and thrown down into increasingly tenuous situations , become this literate?

I can only conclude that the label of “prodigy”, one she heard from an early age, did not apply solely to her dancing talent, but also to her intellect and capacity to pick up information quickly.

Copeland begins her ballet training in California, in a working class neighborhood at the local Boys and Girls Club. Her ability is breathtaking, and a mentor arranges for her to receive further, more advanced training.

At one critical juncture, Copeland’s mother pulls another rip-up-our-roots-and-leave number, and the family, now nearly destitute, lands in a motel room in a seedy area. There are six children and their parent (and boyfriend, at first) living in a single room, and Misty survives emotionally by compartmentalizing her life, fronting at school as if her home is the same as everyone else’s, avoiding prurient details, and doing the same, more or less, at her beloved ballet lessons. (Her mentor is covering some expenses for her, but she does not know this at the time; she thinks it is all free.) Misty ‘s sisters and brothers are increasingly finding other places to spend the night; the integrity of the family is unraveling. Misty survives those nights in the grungy motel by looking forward to school and above all, ballet, the following day. That is, until her mother tells her to quit.

The mentor is having none of it. She confronts Misty’s mother and asks to bring Misty home with her instead. And with a poignant note of pain, Misty tells us, “She let me go.”

Turns out, it isn’t so bad that way. Life in the middle class opens up new possibilities for her, once she is in Cindy’s condo with her husband and toddler. She learns which fork to use, how to set a good table, and watches ballet on video. She has nice clothes and a full belly. Her confidence increases.

But visits back to the motel room to see the family are tense. She is perceived by her siblings and mother as arrogant. She has a new hairdo, and this sets off all sorts of bells and whistles. (Those of us who have been through foster parent training were told: never mess with the kid’s hair without checking with bio-mom first; for some reason, it is a button-pusher.)

After years in the bosom of a new and loving family, in which she is included to the extent of having studio portraits of a family of four framed on the walls, herself, the two new (Caucasian, Jewish) parents, and the little brother, her mother decides to take her back.

This reviewer has been there, and nearly wept at this juncture, though the author puts a professionally polished distance between the feelings she had then; those she had subsequently; and those she has now. Social workers will tell you that a parent who is more than ready to see a child go, a kid who is one more mouth to feed at least, and at times, maybe creates extra work or trouble, often sees their newly-acclimated offspring when they are successful and happy, and they suddenly want them back, as if they can pull a little piece of that success back to themselves. Maybe that’s what occurred here.

Perhaps other, less subjective reviewers may feel differently, but I was surprised to see Cindy wiped out of the story, more or less, once Misty went back to live in the motel, and then not brought back except peripherally at the end. I get it; this is a ballet memoir, but it’s also an autobiography, and when she tells us that she had “been seeing” Cindy and her family off and on, I wondered what kind of interactions took place, and whether she felt turmoil at such times.

One thing was sure, though: just as she took to ballet with remarkable speed and talent, she also took to Manhattan in a New York minute. Though it was expensive and hard to afford an apartment with any natural light or air, she hooked into the city, once invited to study, then perform there, and claimed it as her own.

But culturally and economically, she felt the disparity between herself and other dancers:

“Ballet has long been the province of the white and the wealthy. Our daily, toe-crushing exercises made pointe shoes as disposable as tissues, and they can cost as much as eighty dollars a pair. I came from a family that didn’t always have enough food to eat…[her peers] summered in Europe…their families had weekend homes.”

At one point in her development as a ballerina, when a bigoted reviewer indicates that she doesn’t fit in with the white dancers, members of the Harlem cultural community ask her why she doesn’t come there to dance instead. Why does she put herself through it, they wonder. And in time, she is formally invited to jump ship and come on board the Harlem dance organization.

But she has learned the negative lessons of her mother’s tendency to cut and run when adversity strikes, and she decides she will fight to maintain her position in the USA’s premier ballet company.

International fame follows, along with the opportunity to work with the musician Prince. And there is more, but I should leave a thing or two for the reader to discover.

I appreciated the author’s deft juggling of her personal story and her professional one, although of course they mesh in many places. There is never a point where the story drags or too much information (old grudges or love life details) make me want to skim.

Like the ballet, the story is lean, trim, and full of joy, despite hardship. You should read it.