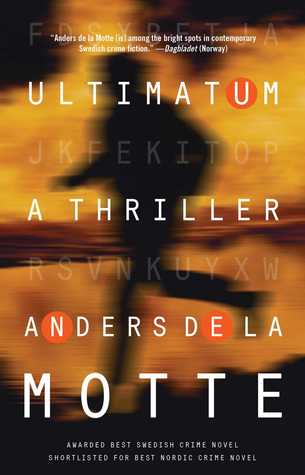 Fans of Swedish crime fiction rejoice; Ultimatum is available to the public today. Thanks go to Net Galley and Atria Books for the DRC, which I read free in exchange for this honest review. Although it is the second in a series, I was able to follow along fine without having read the first in the series.

The story weaves together a cast of complex characters within the Swedish police intelligence network and organized crime. Frequent changes of point of view heighten the suspense, which grows to a screamingly tense climax.

Those that are even a little squeamish may want to pass on this one. My threshold for explicit gore is at the level of The Girl with the Dragon Tattoo (not related to this book, but likely those considering this story will have read that one.) This one went past that, and over the top of my personal limit. I found myself skimming every time some graphically sadistic detail rose to the fore; I had hoped that once we were past the beginning and the discovery of the first murder, it would ease up, but I stuck it out all the way through and it didn’t. Another precaution goes out to those—most likely not a lot of people, but if this is you, you need to know—that have lost a loved one to drowning. Again, the description of the recovered body is very graphic and jarring enough that I had to disengage from the story until I was past it.

I would have liked to see less body shaming (“fat bastard” and so on), and more than one female in this large cast of characters who is in the story for some reason other than to nurture or assist the male characters.

That said, the male characters are well drawn, and the settings are well rendered. Those that aren’t upset by the level of detail to corpses, torture, injuries and personal bodily functions will likely enjoy this white-knuckle thriller.

I found one part of the denouement trite, but then I have read so many of these things that I am pickier than most.

If you want this book, you can buy it now.