“Do you want to understand people? Really understand them? Then you need to know all the best that we are capable of.”

The Winners is the third book in the Beartown trilogy by the iconic philosopher-novelist, Fredrik Backman. In the afterward, he tells us, “To you who have read this whole of the saga, I’d just like to say that I hope it gave you something, because I gave it absolutely everything I had.” I am one of them, and I believe him, and yes, it did. My thanks go to Net Galley and Atria Books for the invitation to read and review. It’s been an honor.

I began reading with a certain amount of trepidation, because everything I’d heard and read, some of it by the author himself, suggested that this wasn’t going to be gentle reading. Here’s how he opens it:

“August ends with sultry, ominous heat before autumn kicks the door in at the end of the month and the temperature tumbles in free fall. The natural world around us becomes erratic and aggressive, the dogs and hunters feel it first, but soon everyone else does too. We notice the warnings, yet still the storm arrives with such force that it knocks the breath out of us. It devastates the forest and blocks out the sky, it attacks our homes and our towns like a grown man beating a child.”

The characters we’ve met in the first two books, Beartown and Us Against You, are all present and accounted for, and now that his faithful readers already know most of the central characters, Backman gives us a few more. The new hockey coach is Elizabeth Zackell, a quirky individual if ever there was one, and smart as hell. We are introduced to a family from Hed, the nearby town whose club is Beartown’s archrival; we become attached to these people, too. But ultimately, we see the way that great love and passionate loyalty can go hand in glove with violence and even evil.

It’s a story that can take your breath away.

I won’t try to address the whole story or individual characters; that’s Backman’s job, and he does it quite nicely. I had a quibble with the way the first book ended; I said in my review that it was over-the-top, bordering on glib. I see now that this was deliberate, and he wants us to see that not every family responds to a crisis as well as the Andersons have, and not every victim of a violent crime is able to see justice done; not everyone has the heroic instincts of Amet, the player that runs toward the fire rather than away from it.

The hallmarks that make Backman’s work so special are all here. I can count on one hand the number of male authors that genuinely respect women and are willing to go to the mat for women’s rights, and he is one of them. He is a vocal champion of the rights of gays and lesbians, and his prose shows keen understanding of the struggle they face, even now that their legal rights are protected in much of the world. His capacity to juggle a large cast of dynamic characters, developing nearly every one of them in a way that is consistent, along with their relationships with each other, makes me feel as if I could recognize them on the street; I don’t mean one character, or two. I mean at least a dozen of them. There are a number of characters that do bad things or make bad choices, but only a couple are genuinely bad people, and though we see little of them, they cast long shadows on these two communities.

He got the ending exactly right.

Can you read this book without reading the other two first? Don’t be a dick. Of course not. Without familiarizing yourself with the characters in the first book before the second, and the second before the third, you won’t be able to keep everyone straight; also, this third volume is about the same length as the first and second combined. Start with the first one. 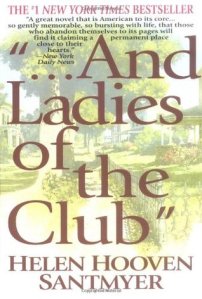 This tome was touted, at the time of its first publication, as the book written by “a little old lady in a nursing home”. May we be forever ashamed to pigeon-hole the elderly in such a manner again. What they MIGHT have said, is that this woman was a college dean of students and a professor of English. She was too busy to finish her book until her retirement. How lovely it was that she lived long enough to see it published!

In sumptuousness and richness, it is like Gone With the Wind without the racism. Most wonderfully of all, it is written in the manner in which time seems to go by, as we follow the life of a woman graduating from a women’s college in the late 1800’s. When she is young, a single year takes up many chapters, but when she is very elderly, one chapter spans years and years. As we age, time goes by so quickly.

Her use of the language is so brilliant that I now count hers as one of my favorite novels. It is thicker than some dictionaries, but infinitely more absorbing, and so I read it twice, once when I was a young mother with my first tiny babes at home; we were poor enough that I saved box tops and waited for double coupon day to buy groceries, but the Book of the Month Club was our one luxury, and they sent this. I read it again later when I was teaching. I gave my mother a copy for Christmas one year, and she loved it too.

I just may go back and read it again..
If you have grown up in the era of instant gratification and sound bites, this is not your book. This is a book to curl up with on a chilly afternoon and let the world fade away. Patience and a fairly high vocabulary level and awareness of the past will help, but give it a try if you aren’t sure. It will be worth it.

climb through book reviews and swim through thoughts.