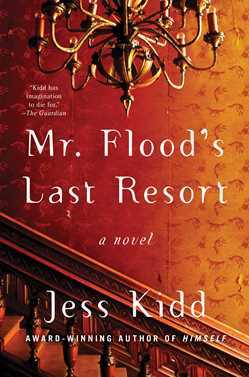 Who do I enjoy reading more than Jess Kidd? Nobody.

Thanks go to Net Galley and Atria for the DRC, which I received in exchange for this honest review. The book, which was also published in UK as The Hoarder, is available today in the US.  And I have to tell you also that although her work is billed as similar to Fredrik Backman, I find it to be better—and that’s saying a good deal.

Maud Drennan is a caregiver, which in the USA would translate as a combination social worker and home health provider. She’s been sent to the large, rambling home of Cathal Flood, a tall, fierce old man who has driven his previous caregiver to a nervous breakdown. Speculation abounds: is he an innocuous old fellow in need of some organization, treatment, and TLC, or is he dangerous—perhaps a murderer, even? What about the missing girl that was last seen at this address?  It’s enough to make even Maud’s staunch heart tremble:

“In the musty depths of Cathal’s lair, one eye flicks open. Noise has pulled on the strings of his web, setting his long limbs twitching. He’ll be slinking out of his trapdoor and threading through the rubbish. Crawling up the staircase with a knife clampled between his dentures and a lasso of fuse wire in his hand, ready to garrot me and hack me to pieces.”

The suspense builds as Kidd moves our point of view from Maud’s by day, to her frightening, confused dreams at night, to those of the missing and the dead. Because Maud is gifted in her ability to see those that have gone before, particularly saints, she receives their cautions and advice in ways that are often truly hilarious. The result is a story so enjoyable that it became the dessert book that I held out to myself as a reward for having finished less enjoyable galleys. Had I no other obligations, I would have gobbled this deliciously dark tale up in a weekend.

As it is, I found myself going back and rereading passages twice, partly for fun and partly to try to pick apart what makes this writing so effective. But although I can point to several components—brilliant development of Maud, Cathal, and friend Renata; some of the finest figurative language in contemporary fiction; a hugely original voice and concept; a soaring climax in which the weight of Western society’s failure to care adequately for its elders comes crashing down before us—ultimately the book is much more than the sum of its parts, an alchemy that is spun magic with a few naughty bits of raunchy humor sprinkled in, and a social justice issue nailed to the wall where we cannot help seeing it.

Should you purchase this title for your magnificent, outrageous mother on her special day, for which there are just 12 remaining days to shop? Should you order a copy for your own fabulous, fierce father, whose day is about a month later? Well of course you can, and you should, assuming you aren’t going to try to force them into a home. But it isn’t nice to break the binding open, and so they’ll be able to tell if you have fudged a free read before gifting it. Better to get a copy for yourself as well, fair and square. You’ll want to read it more than once anyway.

Warm and clever, Mr. Flood’s Last Resort is the most entertaining novel of 2018 to date, hands down.