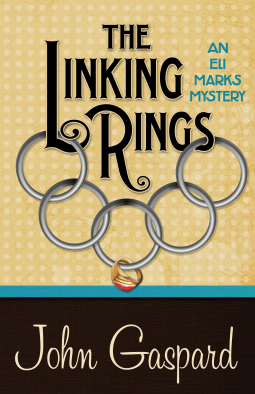 This title is the fourth in the Eli Marks series; I read the one before it and loved it, but you will be fine if you’re jumping in uninitiated. Thanks go to Net Galley and Henery Press for the review copy, which I received free and early in exchange for this honest review. The book is now for sale.

Eli and his girlfriend, Megan, head to London, where he and his Uncle Harry are attending a sort of reunion with a group of magicians. When one of them is murdered, Harry is arrested and so Eli investigates in order to clear his uncle. Along the way more magicians are killed, and Eli discovers that another magician, a TV magician that holds little respect from his peers, has stolen Eli’s signature act.

Gaspard writes a solid mystery, with a manageable number of characters with a complex but blessedly linear plot. His sense of humor slays me. That said, I blanched a few times at the gender stereotypes, which aren’t entirely redeemed by the brief discussion about sexism in the industry. However, the last fifteen percent of the story is so brilliantly crafted—and so hilarious—that I could only bow in awe when it was over.

Recommended to those that enjoy a cozy mystery. 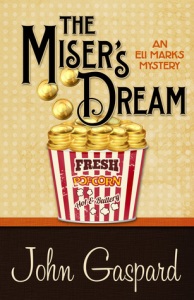 The Miser’s Dream is the third in a series featuring magician Eli Marks. Once I got into it, I did a forehead slap because I could also have read the first two in the series free and reviewed them, had I been paying attention. Thank you to Net Galley and Henery Press for hooking me up with this enormously entertaining novel. It’s billed as a cozy mystery, but were the humor placed around the killer rather than the sleuth, it could have been a comic caper. The title will be for sale October 27.

Marks runs a magic shop and works as a magician locally. He lives over the shop, and the quirky placement of its windows permits him to see into the projection booth of the adjoining theater. Imagine his surprise one fine day when he looks out his window to see a corpse—the projectionist—on the floor of the projection room. It is a locked room mystery, since the man could not have killed himself; the weapon is there in the room; and the door is locked from outside, showing no sign of forced entry.

Gaspard occupies common country with Grand Master James Lee Burke in his cleverness at choosing engaging, oddball names for his characters. In addition to Detective Sutton-Hutton, we also have the sinister Mr. Lime and his assistant Harpo. The latter two seem to have some inside information. Whereas the character descriptions for these two were a trifle overdrawn, putting me in mind of a Tim Burton animation, the dialogue was sometimes quite splendid, and their role in the story is interesting and well played.

For the first half of the book, I didn’t care at all who the killer was. I was having such a good time with the double features, which I highlighted in my DRC and added to at length, but you’ll have to get the book because I’m not going to post a spoiler. There were other odd bits of hilarious detail in unexpected places, perhaps the best, in my view, being the scene with the flower pot. I had begun to wonder whether there was so much extraneous hilarity here that the murder was becoming obscured, but then it all came into focus just when it needed to, and I didn’t have to retrace the thread to figure things out. The plot is mostly linear and Gaspard has used just the right number of characters, not enough to confuse or clutter.

If you need a good laugh, get this book when it comes out. If you like a good cozy mystery, I likewise recommend it. And for those that have precocious pre-teens and adolescents that sometimes read adult-reading-level material, this one has no explicit sex and relatively clean language, and so it is safe to pass on to your budding bibliophile.

To sum up: this is hands-down the funniest thing I have read in a long time, expertly paced and hilariously detailed. Do it.

Musings and books from a grunty overthinker

A Little Writing Workshop of Horrors.