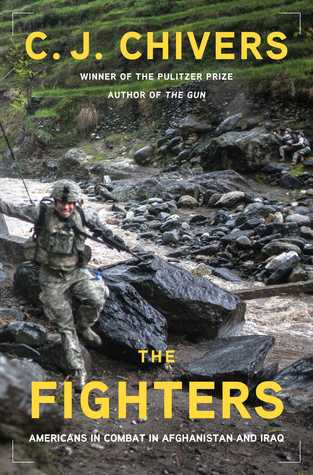 Chivers is a senior editor at The New York Times, and has won the Pulitzer for journalism. This meaty but readable book is the culmination of his years covering the U.S. wars in Iraq and Afghanistan. It is not the creation of a man parked in a library behind his laptop; he has personally gone to Iraq, Afghanistan, Syria, Ukraine, and Libya, and has either accompanied the people he writes about or retraced their footsteps. He covers the lives of six servicemen in the lower and middle ranks of the armed forces, and so he primarily uses eye witness reporting and interviews, in addition to American military data. I read it free courtesy of Net Galley and Simon and Schuster in exchange for my honest review. The Fighters will most likely be regarded in future years as the go-to book for those that want to know more about this war and the people whose lives were changed by it—including many of those whose homeland is or has been part of the war zone.

Chivers sees a tremendous amount of waste and foolhardy disregard for human lives on the part of the Pentagon, and he makes an undeniable case for it. After reading it I came away convinced that he did not begin his project with an axe to grind and seek out the particular facts that would support the reality he wanted to present, but rather that over the many years since the towers fell in 2001, the things that he has seen and heard all point remorselessly toward the same conclusion. In point of fact, there are two places in my reading notes where I marked, without hyperbole, the similarity between the true information provided here and what I might expect to read in The Onion.

Take, for example, the Afghan allies that are integrated into U.S. forces. The U.S. provides them with guns, but as far as anyone can see, it is strictly for the purpose of the Pentagon’s public relations campaign. Afghan soldiers in U.S. units don’t fire those guns. They hold them. They don’t aim; they don’t look at whoever is giving instructions nor at the translator. (They sure as fuck don’t salute.) In a protracted firefight, an American will eventually run out of ammunition and trade their empty weapon for one of those they hold, if the Afghan has not disappeared and taken the gun with him. And at night, the night watch exists in large part to ensure that if the Afghan soldiers choose to make themselves scarce overnight, they won’t take a bunch of munitions and hand them off to the Taliban.

But since the American public is increasingly impatient with the duration and loss incurred by this war, those guys have to be kept around like untrustworthy mascots in order to maintain the illusion that Afghan forces will be taking the place of U.S. troops soon. Timelines get pushed back, but nothing significantly changes. The drums beat on.

Thoughtless and ham-handed decisions by the top brass increase the resentment of civilians that live near the bases, people living in miserable poverty in sometimes directly across the street, with expensive machinery and plenitude of supplies the locals will probably never have. Meanwhile, troops are sent into circumstances that are bound to be fatal and also fail in their military objectives.

It makes you want to sit down and cry.

However, most of the narrative is not carnage and defeat. Who would read it if it were? Chivers instead does a fine job of painting the individual lives of the Americans he follows, and so most of the story reads almost like good fiction, and rather than being swathed in constant despair or endless statistics, I was instead deeply absorbed. Who knew it would be so interesting?

Those that are curious about the war in the Middle East, the first U.S. war in generations to see reporters banned from providing live footage or photographing flag-covered caskets sent home, could hardly find better material to read. This is on-the-ground coverage at its finest. If you want to read just one book about the U.S. conflicts in Iraq and Afghanistan, this should be it.

PBS published an interview with Chivers, and you can see some of the people whose experiences form the narrative, too:

A blog for all kinds of book reviews.