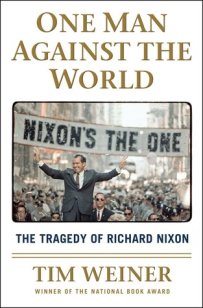 Question: What do an old typewriter, a copy machine, Scotch tape, and a razor blade share in common?

Answer: They were all tools used by White House employee Howard Hunt, at President Richard Nixon’s request, to forge a cable that would make (dead) President JFK appear to have ordered the assassination of South Vietnamese President Diem.

My, my, my. The things you can learn once you start digging. This is by no means the most important part of the Nixon story as told by veteran political writer Tim Weiner, nor even the most humorous, in a grim, gallows sense; it’s just a small sample of the bizarre, the paranoid, and above all, the crooked, reprehensible deeds committed by Nixon and his creepy co-conspirators during his administration. And by now I am already supposed to have told you that I read this book free, thanks to Net Galley and Henry Holt Company.

So, can we find a way to go back and make it look like I told you during the first paragraph, like I was supposed to? And for God’s sake, don’t tell anyone.

How much will it cost to keep this thing quiet?

I was just a kid during Nixon’s first term. But as young as I was, I have to tell you, dear reader, that the times were so polarized, so politicized (not unlike the time in which we now find ourselves) that issues like Civil Rights and the Vietnam War could not be relegated to the more traditional venues, such as the evening news or the newspaper. As soon as someone opened the newspaper, or turned on the television, or started to talk about something they had seen on the news, everyone within hearing range erupted in one direction or another. It happened at home; it happened at school; and it probably happened in workplaces. Even if I hadn’t been so fascinated, there was no getting away from it.

During the time Nixon was in office, most of the media criticism of his behavior was initially soft-pedaled out of respect for his office. It took awhile before anyone in the journalistic community used the word “lie”, for example. The words I heard were “discrepancies” and “evasions”. And all of us, kids and adults alike, were stunned by the number of times the words “expletive deleted” were used.

The fact that President Nixon referred to U.S. Supreme Court Justice Thurgood Marshall as “black of course…dumb as hell” was redacted until after Marshall’s death. The horror.

All that was a long time ago, of course, and Weiner is unfettered by any of the above considerations. His story is remarkably complete yet succinct, and oh so darkly funny. Even though others in my household do not share my absorption in things Nixon-related, I can’t get through more than three pages of this book without having to stop and repeat something on the page to whoever is walking through the room. For example, after having invaded Cambodia without the consent of Congress, and in direct violation of every US and international military law on the books, Nixon announced the invasion to the American people on television thusly:

“This is not an invasion of Cambodia.”

One more thing: Nixon’s cover up; the vast number of dead people, mostly young, who should have emerged alive and unhurt rather than killed against their will in an unjust war; the outrageous wrongdoings that unfolded in our capital and that were paid for with our tax dollars; and the outright theft of Federal monies for personal gain…the parallels that shake out between Nixon and Stalin, whose biography I reviewed two weeks ago, are disquieting.

And that much really isn’t funny.

Weiner, whose journalistic pedigree to date may make him America’s finest living political writer, does an outstanding job of eloquently stating what needs to be said and its significance without tossing in a lot of arcane trivia to muddy the water. Unlike most that have written about Watergate, he had no role in the crimes that took place and has no personal ax to grind. So if you want to just read everything that gets printed about Watergate, as I have so far, then read this along with everything else. But if you weren’t around during this time in American history and want to read one—and just one—book about Watergate and Richard Nixon’s resignation, then let this be it.

At the end of the book is a treasure trove of web links that will take the reader to primary resources, very valuable to those doing research.

Read it for your own political education, or look at it as grim, terrible humor, whichever suits you. For me, I guess it was some of each. But if you want to avoid stepping into the abyss, whether here in the USA or in whatever nation you call home, you’re better off being aware of what took place in the past.

Because it’s better to be watching, participating, and engaging in honest dialogue, and better to back your statements with actions that demonstrate integrity, than it is to hide in the fucking basement and scheme against enemies, real or imagined. Honest social and political discourse carried out as citizens of the world are what keep the rest of us from going down that rabbit hole.

Weiner’s masterpiece will be available starting July 21, but it’s probably best to order your copy now. So much of the future depends on what we know of the past.

A blog for all kinds of book reviews.