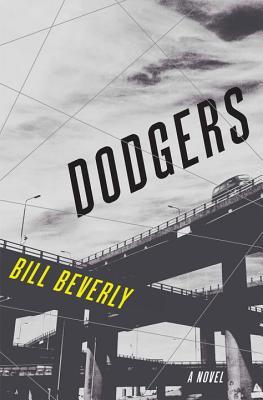 Dodgers is a harrowing tale of African-American teenagers sent away from their home in Los Angeles, an area depressed and tense but familiar, across the Rocky Mountains, the land of white folks, and into the pale rural American heartland, where they have been sent by a father figure to commit a capital crime. I could not wrench myself away from this story for love nor money once I’d begun it. Kudos to Bill Beverly, and thank you to Net Galley and Crown Publishing for the DRC, which I received in exchange for an honest review. This book is available to pre-order right now and becomes available Tuesday, April 5.

Our protagonist is East, and a key secondary character every bit as intriguing is his younger brother Ty. We are told at the outset that East has never had a childhood, and that goes double for Ty, who moved out of the house at age nine, their addicted, addled mother making no effort to nurture or stop them. In fact, a social worker would say that the boys are parenting the mother, if anything. Fin, who serves as the only father figure East has, tells him that he is the man of the house. Most days he works a twelve hour shift standing yard, to the casual eye just loitering or hanging around, but in reality watching for anything unusual that might indicate the presence of cops or another hostile outsider, and it’s his job to make sure that if something happens, it gets stopped before it breeches “The Boxes”, the cluster of squatter’s houses in which drug transactions take place. He’s learned to be observant and a fast problem solver, supervising others that are also standing yard in different locations.

When he is taken to meet with Fin, he is hustled into a car in a way reminiscent of mafia tales, told not to look at the street signs and not to attempt to keep track of the route they are traveling. Fin solemnly tells him that he and three others are being sent to whack an African-American judge in Wisconsin, a man that can rule against Fin in a federal court; the man is “a legal Negro”, and has to be taken out. East has never shot a gun before and isn’t eager to begin, but he can’t say that.

Guns, after all. The noise. The mess. He’d held a gun before but never felt safer for it.

All the same, he was no fool. He knew guns made his world go round.

One of the four young people heading out on this terrible mission is a young man from the middle class named Michael. Michael is a UCLA student, but has taken on the chore of helping Fin establish a drug market at the university. This is the only potentially weak part of the story. Why would a young man with a future do something like this? On the one hand, I can see why we want him in the story; we are trying to break apart the stereotype that every Black kid lives in the projects and is on welfare. Most African-American teens aren’t living there, and in making “The Boxes” in LA seem like the whole world to East, the author risks perpetuating that myth. But apart from the author’s need to recognize that a Black middle class exists, why would Michael be part of this? He has so much to lose and not much to gain other than maybe an adrenaline rush. Michael is the least developed of the four teens, but we do see that his judgment is questionable, and so maybe that could account for it.

As they cross the Rockies, East can’t stop looking out the windows. He has never seen the mountains before, even though they are within a day’s drive of LA, and this is poignant. And as they cross the USA on their terrible mission, we see countless acts of racist misbehavior toward them that provide us with an important subtext: no matter who is in the White House now, racism in the USA is still alive. It isn’t just cops, not just a few crackers waving their Confederate flags. They’re all over the place.

While we’re talking about text and subtext, let me address the use of the “n” word. It’s used liberally here. In schools where I taught, and among my youngest son’s friends (my youngest son and most of his friends are African-American), the acceptable word for Black people to use among themselves ends with the letter “a”, not “er”. Maybe this is a regionalism. At any rate, it is used a lot in this book with the “er” ending, often by the teenagers in dialogue, and also used by racists against them. At one point East points out that Fin doesn’t want them using that word, an instruction that is casually dismissed.  And this quieted my concern somewhat, because while it gets used, it also gets talked about.

And in general, our four characters are not caricatures, but are portrayed with dignity and a point of view that seems authentic to me. I confess I would like to see some African-American periodicals’ take on this book, and given time, maybe I will see some. Right now there are dozens of reviews out, but all of the reviewers whose photos show are white folks, except for a single Asian reviewer. This isn’t the writer’s fault, but it makes me uncomfortable, a crowd of us out here in cyberspace, Caucasian bookworms, offering approval of a Caucasian writer’s version of Black teens from the ‘hood.

But back to our story. Those that think inner city LA is a scary place to go might do well to see the rest of the country from East’s point of view. Out among the cornfields, nobody knows what the rules are anymore. A white guy sitting in the middle of nowhere in a kiosk behind bullet-proof glass is supposed to sell them guns, but things have changed and he isn’t going to do it. The white guy in a hoody that covers most of his face disquiets them all. “Grim-reaper-looking motherfucker”, says Walter from behind the wheel.

All sorts of bizarre cultural cues jump out at them. It’s Christmas, and at odd times, LED lights festoon the fronts of houses: “a Baby Jesus was standing yard.”

Little brother Ty is brilliant but cold; in a different circumstance, he would be parked in gifted ed classes all day long, but here, he is the one that makes hard choices that make sense from the street point of view, and he is utterly remorseless.

I won’t give anything more away, but I have to tell you that when all is said and done, the untold reason for their cross-country mission is the most staggering of all.

You have to read this book.