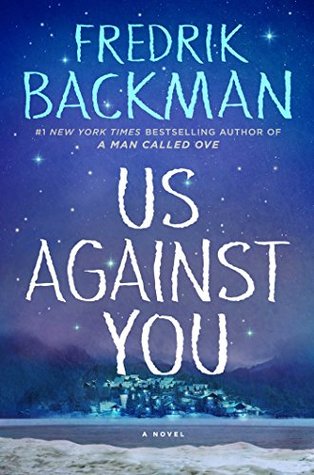 Us Against You is the second in book in the Beartown trilogy. My thanks go to Net Galley and Atria for the invitation to read and review. This book will be available to the public tomorrow.

Beartown is in crisis. The hockey team has been undone by the arrest of their star player for rape, and Maya, his victim, has been harassed endlessly as if she were the perpetrator. Resentments simmer. There are anonymous callers. A new coach is hired, not only a woman—but a lesbian. Chins wag. New owners roll into town, friendly and treacherous, generous and oily. Violence hums beneath the surface as the town polarizes between the hometown hockey team and that in the neighboring town, to which some Beartown citizens have decamped.

Fredrik Backman, who is possibly the finest male feminist novelist in the world, is on a roll here. It’s interesting to note that although the hockey players in this story are men and boys, the best developed, most complex characters are the women. I like reading about Peter, Leo, Amat, Benji, and Teemu, but the characters that keep me coming back are Kira and Maya, Ana and Ramona. More than anything I want Kira to pack her bags and seize the opportunities presented to her, with or without Peter. Just go, woman, go. But it’s always easy to suggest that someone else should leave a troubled marriage behind, and the way that she deals with this problem—and the role that her daughter plays in the decision—is thought-provoking.

Meanwhile there are about a dozen other small threads here, and again, Backman is among the best writers when it comes to developing a large cast of town members without dropping anyone’s story or letting the pace flag. His use of repetition as figurative language is brilliant, and he is unquestionably the king of the literary head fake. If I taught creative writing to adults, I would assign my students to read his work.

I have some relatively minor quibbles here, although I know so little of Swedish culture that they may or may not be valid within that framework. I would dial the sentimentality and drama down twenty to twenty-five percent; clearly most readers love this aspect of these novels, but I would argue for a smidge more subtlety. There are occasional exaggerations that remind me that the characters are fictional. When the entire town is economically depressed, and yet everyone shows support for something by showing up in matching jackets, and when a preposterous amount of spare change goes begging in the kitty at the local bar, I wince. But then I am quickly drawn back in by the complex, compelling characterizations.

If you’re a fan of Backman’s, you won’t be disappointed. If you have never read his work before, don’t start here. Read one of his excellent stand-alone novels, or begin with Beartown, the first in this series. Recommended to those that love fiction that features excellent, complex characters, particularly female characters.