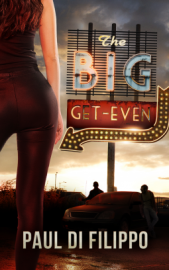 Don’t do it, don’t do it. Put your wallet away.

I received a galley of this story free and in advance from Net Galley and Blackstone Publishing in exchange for this honest review. That said, if I’d been given a free copy plus a million dollars, I wouldn’t be able to write this thing a favorable pitch. An indifferent product rates 2 stars, sometimes 3 if there are redeeming aspects; when I give 1 star, it means I’m pissed.

Part of my indignation, to be sure, comes purely from disappointment. The book jacket looks for all the world like an entertaining read is in the offing. I was so certain this would be a rousing good time that I held it away from myself as an incentive to make myself plow through what I thought would be a couple of less promising projects. And the story’s hook, the voice that arrests us at the outset, also promises us big fun. My first reading note to myself says, “Oh hell yes.”

As we move into the story, a tale of a combination of grift and revenge on the part of two ex-convicts, cracks start to form. For starters, Glen, our protagonist, who tells us he is lazy, free of all ambition, and has enough gold buried in the backyard to keep him happy for a good long while, is attacked by a man that has been watching him. Our protagonist is offered two options: to go in with his attacker on a plan to buy land on speculation and fraudulently sell it to a man the attacker hates, or else be robbed. This is the basis for a partnership. Glen agrees to let all of the gold be placed in a bank account bearing the name of the attacker’s girlfriend, a large, fierce woman that doesn’t do much in this story except make out with Stan and at one point, Glen. And at no point does Glen hatch a plan to get his money back and escape; instead, an instant friendship forms. The hell?

So the story doesn’t hang together very well from the start, but a strong writer can get us to believe almost anything, and I am ready to buy this premise in order to move forward.

There are a number of nasty little remarks about “queers” that frankly don’t set well with me, and they have nothing to do with the plot, apart from establishing Glen and Stan as real live he-men. But at this point I am still prepared to breeze past the offending references, make brief mention of them, and look toward a 4-star rating. If the rest of the book had been well-written and as engaging as the first chapter, I could even have seen a 4.5 rating rounded up. I had seen the bad reviews others had written, and I wanted to be the blogger that steps forward to tell the world that those folks are wrong, and that this is a terrific novel. I was primed and ready.

“Oh hell yes” becomes “Oh hell no” when the partners settle into their newly purchased resort and our middle-aged protagonist wakes up to find the barely-legal desk clerk giving him a blow job. Because, you know, she couldn’t stay away from him.

There is one other female character here. Vee also wants revenge against the mark targeted by Stan, and so she is brought aboard. But like Sandy (Stan’s girlfriend) and Nellie (the blow-job clerk), she has to have a roll in the hay with Glen, and as with Sandy and Nellie, Vee’s greatest role in the story is sexual. At this point I feel as if the author cannot decide whether he wants to write a tale of bold adventure and high stakes crime, or soft porn for middle-aged men; my eyes rolled so high they nearly lodged themselves in my hairline. However, there is foreshadowing that lets us know that the women in Glen’s life are “not through with me” and are going to surprise him, so I read to the end, hoping against hope that there will be a second shoe dropping, a colossal punchline in which the three women turn out to have pulled one over on him and his testosterone-laden (but not queer, oh please!) buddy. Maybe this whole absurd fuckathon is actually leading up to the revenge of the women.

As if the whole thing wasn’t a big fat mess already, Di Filippo puts one last, ruinous flourish on this pitiful tale by adding a host of additional information right at the end that makes it impossible for readers to guess the outcome. This hunk of junk is so badly crafted that not only do I not recommend it, I won’t read this author again.