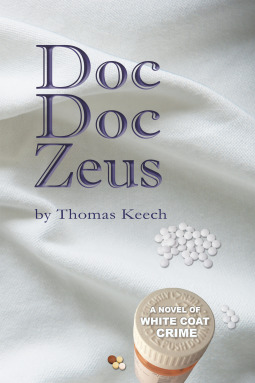 Thank you to Net Galley, the author, and Real Nice Books for the DRC, which I read free and early in exchange for this honest review. This novel was published earlier this month and is for sale now.

Doc Doc Zeus is a tough one to review. There are strengths that drew me at the outset and I thought I was going to love it; unfortunately, the literary aspects and a blind spot or two regarding women and rape have kept me from cheering and promoting the way I expected.

Conceptually, it’s innovative and gutsy. We have Diane, who at 14 has been manipulated by a conservative Christian group and agrees to carry a baby rather than have an abortion.

Diane’s physician is Dr. Zeus, and he is being paid by the church that is housing Diane. Diane is thrilled because she is made to feel heroic, special, for deciding not to end the pregnancy. At age 14, she is right in the throes of the all-about-me stage of adolescence, and this is the strongest part of Diane’s development as a character. Of course, once the baby is born and sent off to live with adoptive parents, Diane is no longer being spoiled and petted, and so she is in a vulnerable place. Her parents are not as available as they might be, so she is isolated, and makes an excellent target for a guy like Zeus.

Zeus is pond scum, a serial rapist, a liar and a thief. He conspires to direct his hospital’s lab business through an intermediary company he owns for no purpose other than to drive up costs and line his own wallet. The guy is so toxic and free of any redeeming qualities that I couldn’t read this story for very long at a time; there are other reasons, too. I’ll get to them in a minute.

Our third main character is Dave, who works for the state’s medical board. Dave is frustrated by the lack of interest on the part of the state in pursuing Zeus legally. Why is this guy allowed to practice? There’s plenty of documentation to show that he should not only be stripped of his license, but be behind bars. Why can’t this happen?

The best part of the book is the opening, not to mention the quirky, engaging title. When we begin, the narratives by Diane and by Zeus make me alternately laugh out loud and groan. It’s dry humor, savagely funny. I want it to stay that way.

Sadly, by the thirty percent mark, I am starting to wonder whether a high profile editor might be needed to assist with the literary aspects of this thing. The last time I saw this sort of problem was also with an author that had a lot of technical expertise and a lengthy, successful career in an area that dovetailed with his novel; Keech is retired from a state attorney general’s office. He has plenty of knowledge regarding state bureaucracy as it applies to physicians, but the elements a novel requires—character development and above all a story arc, with the action and urgency rising around the 75 or 80 percent mark and then falling back toward a conclusion, are simply not present. Our hero, Dave, is trying valiantly to shut Zeus down, but readers won’t engage with the amount of bureaucratic detail here. This area needs to be condensed, and Dave needs development as a character. The setting is nearly absent.

The other problem here is a certain tone-deafness regarding the book’s audience. Potentially, this story could be a rallying cry for women that have experienced rape and for anyone that has been molested as a child or when they were vulnerable. There are so many out there.

But for these readers, this is a hot-stove issue. Less is more. This reviewer has not even been there, and yet the level of detailed sexual predation in this book is painful to me, and unnecessarily so. Chapter after chapter; page after page. Most people that would otherwise champion a novel like this one, won’t finish it because it’s too hard to read. The crime itself should wink in briefly, decisively and memorably, and then the story should be built around it.

I would also change the ending.

To be sure, I am convinced that Keech is on the side of the angels, and I would bet my last dollar that he has seen or heard of a situation similar to the one in this story. I suspect that he’s a good man who is transitioning from his career in state government to a career as a novelist, and trying to use fiction to make a difference. For this reason also, I wanted to be able to promote this book and send out a Twitter storm telling people to read it. I avoided writing this review, because it isn’t the one I had hoped to write.

With a great deal of TLC, this story could be rewritten in a way that would work. The idea is strong, but the execution is lacking. A high profile editor might be very useful here, and if that happens and a rewrite significantly improves this work, I would be willing to reread and review again. But as it stands, I cannot recommend it.