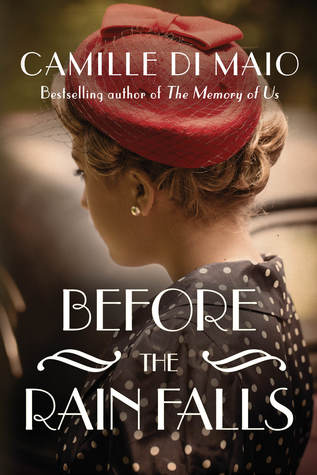 Those looking for a sweet, light romance will find it here and come away happy. It was just published, and you can get it now. Thanks go to Net Galley and Lake Union Publishing for the DRC, which I received free of charge in exchange for an honest review.

The story is divided between three protagonists, and the narrative alternates to include each of their points of view. Two of the characters are Della Lee, a very elderly woman recently paroled from a life term in prison for the murder of her sister, and Paloma Vega, a young doctor that’s returned to her hometown on the Texas border to take care of family business.

One thing that drew me to the title is that the most important characters are both women, and it is they that prove to be the most dynamic. Our third character, Mick Anders, is a journalist seeking Della’s story. He is changed by it, and yet really his character exists as a foil for the two women. So far, so good.

Because the premise starts with the woman who’s spent her entire adult life in prison, I was expecting something grittier. Women in prison haven’t really made it into a lot of fiction, and so my interest was piqued. I was also hoping for a social justice angle, and to be fair, the teaser promises no such thing, and so to an extent, this disappointment is one I brought on myself. Though Della’s reminiscences as she unspools her memories for Anders recount some of what she went through, it really isn’t a prison story, but the story of Della’s own life and the sacrifice she has made.
The parallels between Della’s life and Paloma’s intrigued me and I was hoping the novel would veer in the direction of literary fiction, some allegory perhaps; something subtle and open to the reader’s interpretation. This isn’t that either. Soon the parallels feed into a tidy package, and the coincidences are just too many. I had reconciled myself to the likelihood that this really would, in fact, be a straight up historical romance, and if the end had been crafted in a more nuanced way I could have given it four stars, but instead it is predictable, and when that happens there can’t be magic, because the Great-And-Powerful-Wizard’s curtain has been pulled away by the unlikeliness of the story. Toto has the curtain in his mouth, and instead of looking at Della, at Paloma, and Nick I am looking Di Maio and saying, Oh come on. Seriously?

Some of the better moments in the story are the side elements, the interaction between Paloma and her sister Mercedes, an adolescent smarting from Paloma’s abandonment when she moved away. Paloma is wooing her back into a sisterly relationship, and her clumsy missteps and the ways in which she corrects herself are resonant and absolutely believable.

Although Della’s back story feels over-the-top to me, her present, the return to her home after seven decades away, the changes in the home and the strangeness of being back in the world and at liberty are also well done. The author does a nice job in crafting Della’s present-day setting and wedding it to her story.

Those looking for a traditional romance, something to pack for a vacation that will leave a warm, fuzzy afterglow will enjoy this novel, and to them I recommend it.