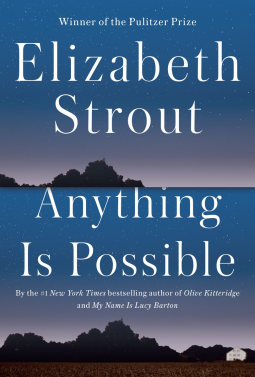 Strout is a writer of enormous talent and the owner of a Pulitzer. Here she builds on the characters she introduced in 2016 with My Name is Lucy Barton. Lucy is back, along with various relations and everyday people. I read this book free and early, thanks to Net Galley and Random House, for the purpose of generating an honest review. This title will be sold April 25, 2017, and those that love strong literary fiction won’t want to miss it.

Lucy has become a successful writer, and she has left behind her early life of extreme poverty and the people she spent it with. They’re still there, and some of them are bitter. Strout crafts each character in a series of consecutive short stories that build on one another, and although most of the people she features here are not ones you might want to spend time with if they were real, she designs them with so many layers and with so much nuance that it’s hard to remember they aren’t. We revisit the Pretty Nicely girls, and Lucy comes home for a visit. But facing the demons of the past, those that her siblings still speak about freely but that she has kept carefully compartmentalized in an emotional deep freeze is too much for her, and she has to leave earlier than she had planned.

One thing I appreciate about Strout’s writing is her affection for the working class and the down-and-out. Some of her characters have been kept from success by hard luck, and others by lack of talent, but they are still people, and they’re sometimes capable of more care and greater compassion than other folks that haven’t ever suffered. Strout develops these characters like nobody’s business, and you almost don’t need a plot, because the people themselves are the whole story. I like the chapter that features the Hit Thumb Theory, and the ramification of privilege it conveys.

Strout writes with an implied intimacy that is rarely found. Sometimes I feel as if I have entered in the middle of a conversation, and there’s a shorthand among the family members present that I have to watch for carefully before I understand what’s happening between them. Most writers don’t even attempt this kind of subtlety because it’s so difficult to achieve. In someone else’s hands, the reader might come away wondering just what that whole thing was about, but here I find myself leaning in, absorbing details carefully meted out with great discipline and flawless pacing.

If you’ve read this author’s work and liked it, you can be assured you will like this as well. If not, be aware that it isn’t warm and fuzzy writing; don’t take it to the beach. Rather, the joy comes from witnessing the way she draws her characters and their lives without trying to put a shine on them, leaving them as stark and real as human beings often are.

I highly recommend this book to those that enjoy brilliantly written fiction, and to teachers of creative writing.