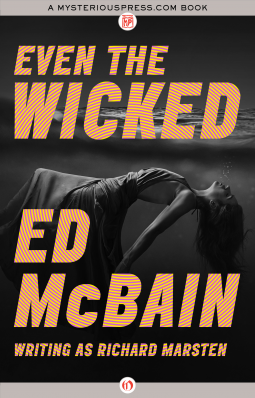 Best known by the pseudonym Ed McBain, Richard Marsten, the name under which this book was originally scribed in 1958, was born as Salvatore Lombino.  I was a huge fan of McBain’s, and every time I see some small thing he wrote that I haven’t had a chance to read yet, I snap it up. And so it was with this DRC, which I received compliments of Net Galley and Open Road Media. But once I reached the halfway mark, I felt sort of queasy and couldn’t continue. I suspect that much of what he wrote as Marsten might as well be left in whatever obscure attic corner it’s perched in, because society has moved forward since the 1950s, and this book is still there.

The premise is this. Our protagonist, Zach, is returning to the beach house where he and his now-deceased wife stayed on their wedding night. He brings their little girl Penny along with him. Before he can commence to do any sleuthing, however, the real estate concern that rented the place to him tells him it’s been taken by someone else. Zach isn’t going down easily for two reasons: first, he wants to see if his suspicion regarding the possible murder of his wife is true, and second, he’s already paid in full for the entire stay. The story starts with the excellent, tense build up that would become Lombino-Marsten-McBain-Hunter’s hallmark. I rolled up my sleeves and snuggled in.

And then bit by bit it all went to hell.

First of all, why would a man on a deadly mission bring his little girl with him? Leave the tot somewhere safe or stay home. And then there’s the stereotypic, racist crap about the local Indian. (He’s ‘chiseled’, of course, but he’s also just plain creepy looking.) Next, Daddy Zach tells Penny that he’s pretty sure her mommy was murdered.

And as he sets up his date with destiny, he finally realizes he has to have a sitter for Penny after all—in the contested house, of course, where surely nothing bad will happen to her while he’s away—and so he asks a complete stranger for the name of a babysitter, and the person refers him to someone that’s also a complete stranger. He sets it all up, arranging to leave his little girl, all he has left in this world, with someone he’s never heard of till today and doesn’t even plan to interview, and hits the road to solve the crime.

I got halfway through this thing and finally threw up my hands. Had I read the rest, I might have thrown up, period.

I know that in bygone times, people in the US were much more relaxed about child care arrangements than we are today. Many Caucasian people were also really racist, and men and sometimes even women were sexist, too. But that doesn’t mean I care to see it in my escapist fiction.

If you haven’t read Ed McBain, find something he wrote after 1980 and you’ll be in for a treat. But this one is a thumbs-down.