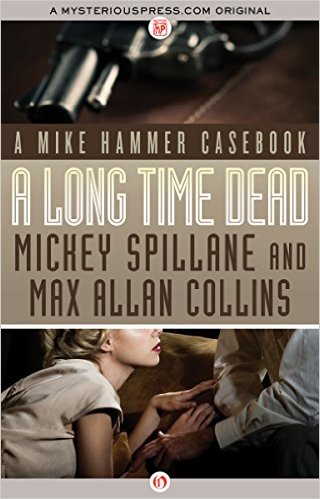 “The evening sky was gray and growling but I had left the trenchcoat behind and my suit coat was unbuttoned. This was the kind of sketchy gin mill where I wanted easy access to the .45 under my arm. The waterfront bouquet greeted me, salt air, grease, oil, sweat and dead fish drifting like a ghost with body odor.

“If you needed to know anything about the harbor facilities stretching from the Battery to Grant’s Tomb, or wanted a line on anybody in the National Maritime Union or the Teamsters, this was your port of call. If you wanted to get laid or make somebody dead, that could be arranged, too. You know the place. They have them in London and Mexico City and Rome and Hong Kong, with smaller variations in smaller locales. But none were meaner or dirtier than the bar run by Benny Joe Grissi.”

Spillane was the prototype for noir fiction, and even though he’d been hiding in plain sight, I never read Spillane because he wrote so many books that I assumed he was cranking out something formulaic, a pot boiler special. I am delighted to find I was mistaken; this set of short stories, an atypical medium for Spillane, was provided to me free courtesy of Net Galley and Open Road Integrated Media in exchange for an honest review. I’ve had a few DRCs that didn’t measure up to my expectations lately, and this particular galley was my bright spot, the reading I considered my dessert after I had dutifully choked down the stuff I was only reading because I’d said I would.

Collins was a close friend of Spillane’s, and at the author’s request, he rounded out some rough drafts that had been left behind when Spillane died. Collins suspects that they had been left dormant because the author’s church would not have approved of the brief—and by today’s standard, very tame—sexual content included. Whatever. We can read them now, and Collins has used Spillane’s style seamlessly. Only one of these stories is more his than Spillane’s, and he tells us which one it is. He did a great job with it.

The author is legendary for the call-and-response style dialogue associated with the genre as a whole now. His use of it and other figurative language is so sweet that I found myself—a retired language arts teacher whose highlighter is the modern day equivalent of the red pen—noting passages where it’s artfully used, and sometimes I got so caught up in watching the language that I had to go back and reread a few pages, because I had lost track of the plot. But it was worth it. Here are a couple of examples:

“’Sure you aren’t seeing ghosts?’

And on the same page, more of the same; Lincoln followed by Lincoln, salesman followed by salesman. Together with the alliteration and the brisk, no nonsense yet curiously intimate prose, I found myself mesmerized. Spillane doesn’t care about preserving evidence, and he usually won’t call cops, at least not until his own business has been concluded. Given today’s social climate and mistrust of urban cops, I suspect this newly issued work by the famous writer will find a wide audience.

Although it’s been decades, I can nearly swear that the Carol Burnett show did some spoofs of this type of narrative during the 1970s, when I was just a kid. If one uses too much of the repetition it becomes ridiculous, and of course Burnett and her colleagues could spot fodder for satire a mile away. But although I kept my antennae up, I never found a weak place in the text that took the lyrical repetition to the point of silliness. It’s carefully meted out so that it reels the reader in rather than appearing ridiculous and distracting. And if you look at my last sentence, I can promise you the alliteration there was unintentional. Good writing stays with us, as any teacher will tell you; this is one reason we have students read something before they write. And thus it is that a tiny nugget of Spillane’s technique has made its way into my review.

Most people don’t want to analyze detective stories; they just want to read them. If so, then you should be good to go here. I was additionally pleased by the lack of racial and ethnic slurs which some writers of the genre would include in the name of authenticity. Likewise, the gorgeous receptionist is actually Spillane’s partner in both senses of the word, and she listens to what people reveal when they believe no one important is listening.

This is the very best of the noir genre. If you enjoy great detective fiction and can stand some graphic violence, this book is for you.