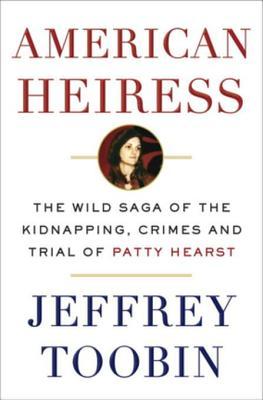 Sometimes the truth is stranger than fiction, and the Patty Hearst fiasco was definitely a case in point. This reviewer is old enough to remember the news coverage at the time; here Toobin presents us with what is likely the most objective and well researched account of the kidnapping and subsequent crime spree in which Hearst was a participant. Thanks go to Net Galley and Doubleday for the DRC, which I received in exchange for an honest review. This book was released digitally earlier this month and is available to the public now.

In February of 1974 Patricia Hearst, favorite daughter of Randolph Hearst, the publishing magnate, was kidnapped from the Berkeley apartment she shared with her fiancee. The group that grabbed her called themselves the Symbionese Liberation Army, or SLA. It was an historical time when many young people considered themselves revolutionaries, inspired by the Civil Rights movement, the women’s movement, and the Vietnamese and Cuban revolutions. But the SLA was an odd formation at best. They were the product of students from the University of California at Berkeley that had been part of a project to tutor prisoners at the Vacaville penitentiary. Instead of the prisoners gaining literacy, the students were mentored by a handful of prisoners in how to handle explosives and commit crimes against private property and the US government. The entire SLA, it would later be learned, consisted of seven Caucasian people under the age of 30 and one Black man named Donald DeFreeze. By the time this group of irresponsible nut wings made headlines, there wasn’t a legitimate group on the Left that would have anything to do with them.

But the story gets weirder still. The heiress had become bored with her boyfriend and was a terrible student; her future was looking lackluster, even depressing when the kidnapping took place. Within a few weeks, Hearst had joined her captors, brandishing an automatic weapon during a bank robbery, one of a number of crimes in which she participated. And the enormous amount of media attention paid to this band of misfits set tongues to wagging from city, to suburb, to the hinterlands: was Hearst truly a convert, or was she just following orders to stay alive?

Other books have been published about this bizarre series of events, but as far as I know, all of them have been written by those with a stake in the outcome. Toobin, an independent journalist who’s written for the New Yorker, has examined court documents and a host of other primary resources to ferret out the truth. Hearst chose not to cooperate with his book, which is the most objective treatment of the subject I have seen.

Most of the book chronicles events that are too strange to be fictional, and there is tragedy as well. But my favorite passage is when things are falling apart and one of the kidnappers tells a friend on the outside that a “Ransom of Red Chief” situation is developing, and everyone would really like to release this woman so the cops would stop searching so hard, but she just won’t go home. I also enjoyed the anecdotes regarding attorney F. Lee Bailey.

This is a fast read, with plenty of dialogue. There are no slow spots. And I can almost guarantee that no matter how off kilter your own life is right now, Hearst’s adventures will make it look tame indeed.