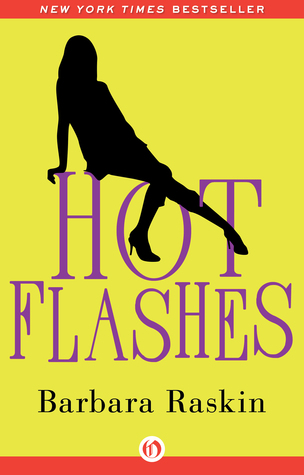 “Hot flashes are rolls of unreasonable, unseasonable heat that create a rush—a flush that floods the face from neck to hairline. A hot flash is itchy, prickly and provocative—like a sudden spike of fever that produces a mean and cranky irritability.”

Raskin’s novel about a group of middle-aged women that come together to mourn and bury a dear friend was a New York Times bestseller many years ago, hailed as a “landmark women’s novel” at the time it was first released. I was invited to read and review it by Open Road Integrated Media and Net Galley.  And on the one hand, I can see why it was considered ground-breaking in 1987, but on the other hand, some novels age more gracefully than others, and this one doesn’t. My three star rating applies to a niche audience of middle class Caucasian feminist women from the Boomer generation, but even for us, some of what is found here rings insensitive and tone deaf, because the world has moved on, but Rankin’s novel remains the same.

Suki has died, and her friends come to her home, because she has nobody else apart from her teenage son, David. Suki had a breakdown around the time Max divorced her;  Ivy League educated Caucasian women raised in the US during the 1950s grew up with the societal expectation that their own talents were secondary to those of their husbands, and so they placed their own careers—Suki and all of her friends are writers—on a back burner in order to be good wives, mothers, and hostesses. The whining, entitled tone with which the book starts out, giving an overview of a life lived with Caribbean vacations, expensive wardrobes, endless tennis matches and fancy parties is going to set a lot of readers’ teeth on edge. It did mine, and I would not have finished reading it if I didn’t have an obligation to the publisher.

But underneath it all, there’s a second reality, and that’s what perhaps makes this book worth bringing back: these women, the ones that “kept our slave names” once they are divorced so that the ex-husband can marry a pretty, young trophy bride and set his first wife out to pasture, often find themselves with no job skills, their diplomas from Radcliffe and Yale obsolete after sitting in a drawer for thirty years or so, and so they find themselves with no income. Many of them had become isolated during their years of housewifery, staying inside the home to keep it tidy and welcoming whenever they were not driving a carpool of children or running household errands; there is something diminishing in telling an intelligent woman that the right thing to do is to iron sheets and shut up. So there is a Virginia Woolf-ish quality to some of this novel, and it is there that it finds some redemption.

That said, you need to brace yourself for the rest. These women consider themselves progressive if not radical, having prided themselves on their dedication to fighting the US war against Vietnam, and some dabbled momentarily, it seems, in the Civil Rights movement also. They have one African-American friend that appears after the 80% mark to become the token Black buddy, and she gets to deliver a few very wise lines before fading back into the distance. One of the Caucasian women makes a remark about Suki having been “colorblind”, and this made me want to punch a wall. But readers born later than 1970 should understand that white supremacy as an underlying assumption of daily life was eerily prevalent in Caucasian households during the period when these women were young; at that time, pretending that all races were alike was well-intended though frustratingly ignorant.

Another aspect of the text that seems hugely off base today but that was common to most progressive literature of the 1980s is that every single person in this supposedly forward-looking atmosphere is straight. Don’t even think about gender identity issues; back then there was still a hugely prevalent assumption that women loved only men and men loved only women, and everyone was comfortable with the sex organs with which they were born.

And so a formerly progressive book now sounds really off kilter in many, many places.

For those that have been deeply immersed in women’s literature from all eras, including the eras of Charlotte Perkins Gilman and Virginia Woolf, this book might be a worthwhile addition to your collection. But as general fiction, I cannot give it a solid recommendation.

This book will be released digitally August 9, 2016.