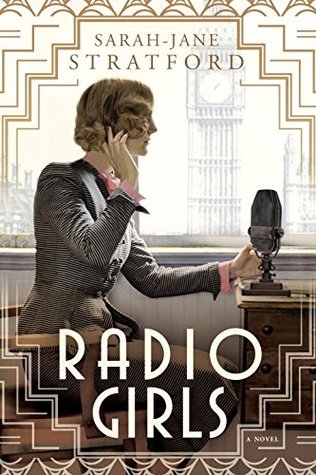 Radio Girls is a fictionalized account of the British Broadcasting Corporation and the remarkable women that shaped it. As we near the centennial of women’s right to vote in the USA and the UK, Stratford’s riveting historical fiction could not be better timed. I received my copy free and in advance thanks to Net Galley and Berkley Press in exchange for this honest review. I am overjoyed to be able to recommend this new release unequivocally. You have to read it.

Maisie Musgrave is born in Canada and raised in New York City. Tossed out of the nest without a parachute by unloving family, she makes her way to Britain, the place her heritage began. She wanders into the BBC half-starved and looking for an honest way to pay for her room and board, hoping in the meanwhile to meet a man she can marry for financial security.

At the BBC she meets supervisor Hilda Matheson, who fears nothing:  “Give that woman an inch and she takes the entire British Isles,” a colleague remarks.

Under the firm and commanding wing of Matheson, Maisie’s confidence and talent grow daily. It’s a very good thing, because over the course of time, more will be demanded of her than secretarial skills and errand-running.  My busy fingers marked one clever, articulate passage after another to share with you, but to enjoy Stratford’s fresh, humorous word-smithery, you really need the book itself.

Occasional historical figures drop in—Lady Astor, who was a moving force in the development of the BBC and a champion of women; Virginia Woolf, early feminist writer and crusader. Yet Stratford metes out these references in small enough batches that it’s clear she isn’t relying on them to hold her story together; rather, they are the cherry on the sundae.

Setting of time and place, pacing, and a million twists and turns in plot make this a good read, but it’s the character development that makes it a great one. I found myself wanting to talk to Maisie and cheering her on when she broke through to higher ground personally and professionally. I feared for her when she veered into dangerous waters and nearly wept with relief each time she was able to extricate herself and move forward. There isn’t a slow moment or an inconsistent one, and the protagonist is just the character women need to see right now as we move forward too.

How much of this is based on truth and how much made up for the sake of a great story? Read the author’s notes; she spills it all.

All told, Sarah-Jane Stratford’s historical feminist tale is perfect for today’s modern feminists—and those that love us.

This book is available to the public Tuesday, June 14. Change the screen and order a copy for yourself now. You won’t want to miss it!