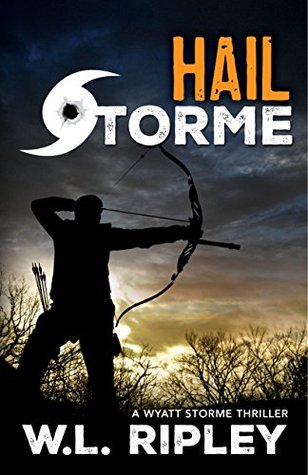 In 2015, I reviewed Storme Front, the second of four books in the Wyatt Storme series. I loved it and rated it 5 stars. Given the opportunity to read and review this first in the series, thanks to Brash Books Priority Reviewers Circle, I didn’t have to think twice. Thank you to Brash for the DRC, which I read free in exchange for this review.

In this first installment, Storme, a retired football hero and Vietnam veteran, goes bow hunting for deer in Missouri and runs into trouble. Tracking deer, he literally walks into a field of marijuana; before he can decide what if anything to do about it, a snarling Doberman charges him, and he has to kill it. From there, the action unspools, taking him into town and leading the reader to a series of conversations and confrontations Storme has with the local law, the local goons, and of course, women.

The local law can’t quite decide what to make of him:
“’You a wiseass, Storme?’ McKinley asked.
“I shrugged. ‘It’s a gift.’”

Of particular interest is Willie Boy Roberts, a local businessman that has full time body guards, here in this tiny town. So right away, we know there’s trouble a-brewing that extends far beyond a simple field o’ weed.

Storme also meets Chick Easton, who will become his wisecracking, crime-fighting partner continuing on into the series. Easton has been a green beret, has killed people for the CIA, and is also a Vietnam vet. He has considerable regret about the life he has led, but he’s a great guy to have in your corner. He also provides the perfect counterpart for all of the genuinely funny snappy patter in the book.

I also genuinely appreciated, as I did with the second Storme book, having a protagonist that drinks coffee rather than whiskey or beer, but doesn’t constantly agonize over his alcoholism. It seems like two out of three works of fiction these days feature alcoholic protagonists or important secondary characters, and I have had my fill. Just pour the coffee and shut up already! A welcome change.

This first novel started out a little bit uneven, but hit its stride well before the halfway mark. I really thought it would be a four star read till I got to the last ten percent. There, it gets ugly. There’s a steady stream of anti-gay venom. Easton discusses a suspect with Storme, and he deliberately lisps—gee, I’m not laughing—and does the whole limp-wristed thing when he speaks of the character’s possible motivation. I won’t say more here lest I spoil a (small) part of the whole who-dunnit, but there is so much ugliness toward gay men, not just the offensive jokes, but some plot moves that left me feeling as if I’d eaten spoiled food, packed into this last portion of the book that it’s impossible to disregard it and move on.

I checked the copyright date, longing for something that would permit me to give this otherwise really good story the four stars it deserved up to then. It was originally published in the 90’s. No, no, no. Not okay.

Because of this factor, I rate this novel 2.5 stars and round it up with a fair amount of ambivalence.

The writer makes a point, subtle yet distinct, that Storme is a Christian. Fine with me. But if the anti-gay aspect of this novel is tied to dearly held principles Ripley possesses, I can’t become a constant reader. If it was simply a failure of the writer to update his work to reflect a more widely held social view—and here I am thinking of the occasional novel that gets written, sits on someone’s desk for several years, and then sees publication much later—then he and Brash might want to have a conversation about editing. Don’t get me wrong; I support the First Amendment right to express one’s ideas freely. But when those ideas brim over into hate speech and homophobia, I also can’t give a positive review, or consider myself a potential customer of the work presented me.

If you are homophobic and love mysteries, this one is your book, and it’s available for purchase now. Otherwise, consider moving on to Storme Front. You don’t have to have read the first in the series to enjoy the second.

Am I game to read #3 and #4, knowing that #2 is free of these challenging issues? If I can get the DRC’s for them, I’ll dive right in. Everyone is entitled to make a mistake early in their career. But right now, I wouldn’t lay my money down