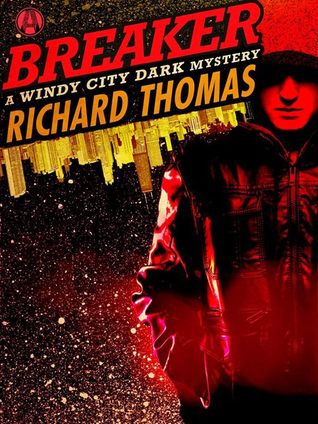 Richard Thomas is a monstrously great writer. In Breaker, a Windy City Dark mystery, he presents us with Ray, a man of unusual and intimidating appearance; a sinister stranger in a white van who victimizes Chicago’s working class school girls; and Natalie, the girl that lives next door to Ray. Though this is the first Windy City Dark mystery I read, I fell in, only extricating myself close to bedtime, because this is not the kind of thing you want entering your dreams. This smashing thriller came to me free of charge from Net Galley and Random House Alibi.

The first thing I usually look for in fiction is strong character development. In excellent fiction, sometimes the setting drives the character; sometimes the setting and character drive the plot; sometimes the plot is driven by character. Breaker definitely falls into the last of these categories. Told primarily in Ray’s first person and counterpointed by Natalie’s, along with a narrative that pops in and out surrounding the white van, the suspense is almost unbearable. The character is so palpable that I impulsively reached into my Goodreads account and checked the “literary fiction” box among my own library categories. The story is dark and haunting; fans of Stephen King, a writer Thomas lists among those that have influenced him, won’t want to miss out on this story. Though it is not driven by the supernatural, the tone and level of nightmarish suspense are quite similar.

Part of the hook is the affinity the reader must feel for Ray after just a short time. He lives alone; others are often afraid of him on sight because of his enormous size and ghastly pallor. His mother is dead, and we learn more about this eerie aspect of Ray’s past as the story progresses. He lives in the city’s gritty underbelly, spends almost nothing of what money he makes as a cage fighter—a sport so much more horrible than boxing—on himself, and he is constantly alone.

Meanwhile, Natalie, the 15-year-old next door, is being stalked by the white van. Because Natalie is kind to him and does not fear him, Ray reaches out to her in an uncharacteristic way and teaches her the self-defense tips none of her high school teachers will ever be able to provide. Their friendship is platonic but the bond is tight.

Meanwhile, the white van has Chicago even more on edge than it usually is; girls are disappearing, and no one knows who is taking them. Every white van begins to look sinister. I found myself gripping my electronic reader, and though I had been resting the arm that held it on a pillow, I found myself holding it up in the air because my hand had nearly tightened into a fist.

I marked a number of really stellar passages—this guy is fantastic with gripping figurative language—but at the end of the day, I am not supposed to reveal any quotes till the book is on the shelves, and I want you to know about this one right now.

It’s up for sale January 5, 2016, and it will help you forget all about your post-holiday blues. Get this book!